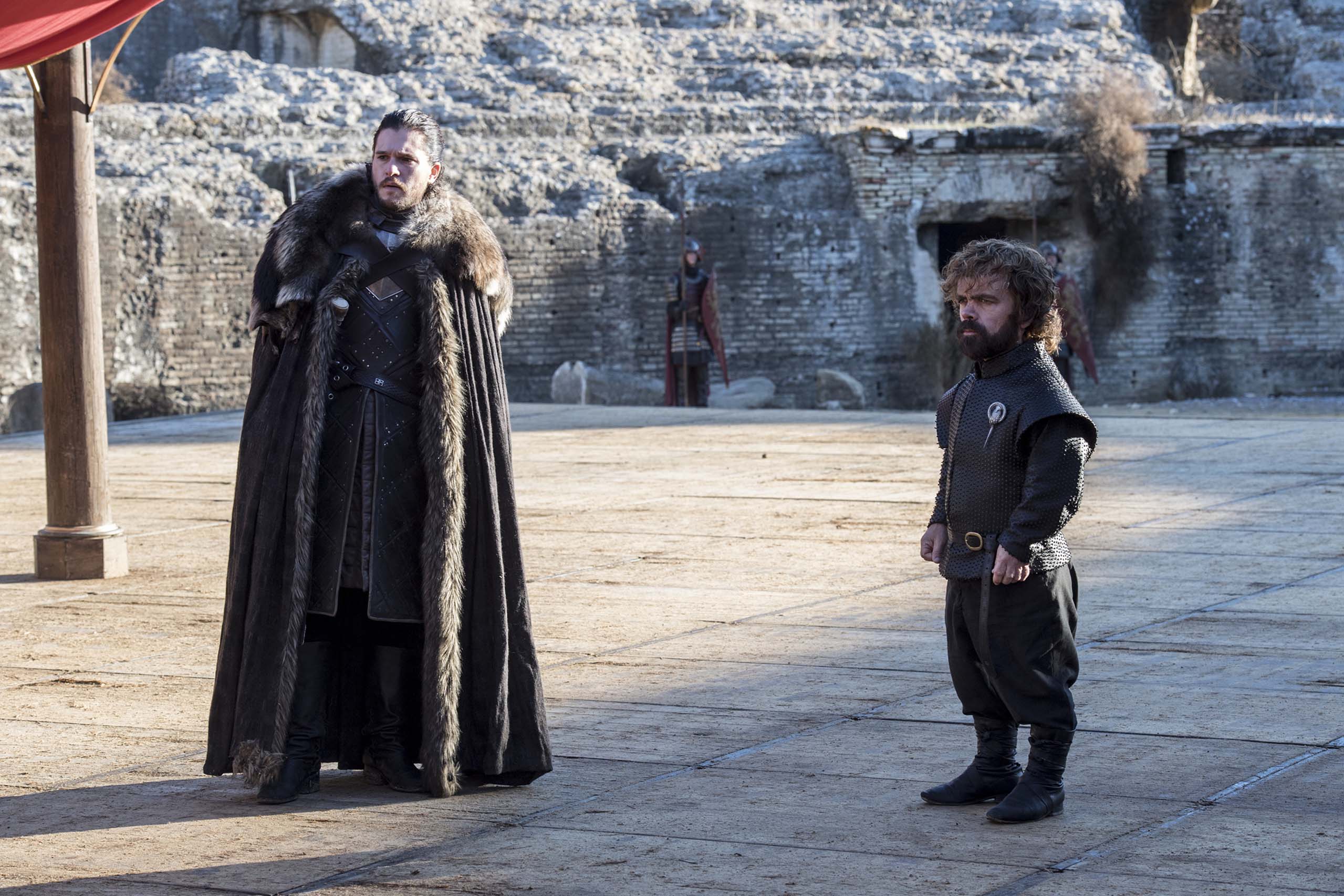 Spoilers. Obviously. Mild nudity from the show in a gif.

So that was a wild ride! Wow. This was an excellent finale with a lot of pay-offs and some solid acting. While I enjoyed the action sequences in the past few, Game of Thrones for me has always been strongest when they focus on the characters and the twists and turns for them. The acting was strong this episode too, and we had a lot of wonderful reunions. Previously on Game of Thrones, the White Walkers have a dragon now, as Viserion died and was brought back by the Night King. Team Dany stole a wight so they could prove to Cersei and others that the threat to the north is more important than their war. Sansa and Arya were not getting along and Littlefinger was loving it. Dany and Jon were making googly eyes at each other. Bran knows that Jon is a Targaryen, and Sam has the info that he was probably legitimate too. Brienne and Jaime are my OTP and that’s all I cared about this episode.

Right off the bat, seeing everyone interacting at the dragon pit was WONDERFUL. I was so excited to get all these characters together. And the reunions! Pod and Tyrion, Tyrion and Bronn, the Hound and Brienne, Brienne and Jaime (AHHHH), the Hound and his brother, Euron and Theon, Tyrion and his siblings, and of course Cersei and Dany meet for the first time. Dany arrives on her dragon because that’s what she does to put people on notice. Plus her Unsullied and Dothraki are outside, terrifying most people no doubt. Euron is a dick right off the bat, I really dislike him, I don’t find him as appealing a character/villain as I think they want me to. They waste no time in bringing out the wight, and everyone there is shook. Cersei for the first time looks genuinely terrified, especially since it comes out and goes directly to her. So at least no one is questioning it anymore. None of them can believe this is a trick. Euron goes hahahhaha see ya and leaves (more on that later). Cersei says she’ll help them if Jon swears to keep the North out of the war afterward, but he – being a noble idiot – says he’s already promised his fealty to Dany and can’t do that. So Cersei’s like peace out.

People wanted Jon to lie, of course, but that’s not how he rolls. He points out that if no one’s word matters, there’s no point to any of this, it’s just more lies on top of lies. Yeah, Jon, that’s how this show goes, honey. Tyrion decides to go confront his sister, knowing she could kill him instantly. They have what is certainly the best acting of the entire show. Peter Dinklage and Lena Headey are good friends IRL and you can tell, the intimacy of their interactions makes you believe these two characters know each other well.  It’s been years since we saw them together, and they reminded me all over again how they bring the best out in each other as actors. This scene was a highlight for me. Tyrion tells her she can kill him, and she decides not to. She puts the blame of her children on him. He wants her to reconsider, and says he follows Dany because she could make the world a better place, and Cersei’s like lol who cares. He figures out she’s pregnant. We don’t see the rest of the conversation, but Cersei agrees to send her people with the others to fight the White Walkers. Anyone who believes this is stupid, tbh. I mean, she’s an excellent liar so I almost believed her, but it’s Cersei. She’s never done anything noble in the entire show.

BUT this is good because Jaime legit thinks they’re going, and he’s stupidly shocked when she goes lol of course I’m not doing that. Euron left to get the army the bank promised and it’s all a ruse. Jaime had a very brief but serious confrontation with Brienne (AHHHHH), where she of all people says FUCK LOYALTY and it shakes him. He decides to go north regardless. Cersei almost kills him, for real, and you can see in his eyes that he knows it’s gone too far now. So he leaves. YAY. FINALLY. Jon and Dany bond, and Jon and Theon have a really sweet scene. It leads Theon to grow a spine and go and get his soldiers back, promising to find Yara. He gets the snot kicked out of him first, but he’s been through worse pain. Yay Theon! Of course on the way to the north, Jon and Dany have sex, which we’ve all known was coming for awhile. The problem being that in a voice over at that minute, Bran and Sam figure out Jon is not only a Targaryen, but Lyanna and Rhaegar were married. It’s weird being fine with incest, this show man, but I do feel bad for Jon and Dany as it’s clear this means a lot to them. They’ve had a really hard time both in life and in love, and they seem tender and probably hope this could be good for them. Sorry, kids. Nothing in GoT is that simple.

What was that weird look on Tyrion’s face btw as he realized they were boning? Is he worried this won’t actually be good for either of them or complicate things? I don’t think he’s jealous, although I can see the reading of that. Dinklage never does anything accidentally so I think there’s a reason for it. I still don’t think Dany has anything to worry about re: Jon’s parentage and his role as the heir. Jon has never wanted to be that person, and he would never fight her for the throne now that he sees she’s a good ruler. I think it’s more likely they will have some tense moments until he reassures her, and she’s certainly going to get pregnant. Jon swore he would never have a bastard, so he’ll feel obligated to marry her. Their marriage might start out really bad and awkward, he won’t be comfortable with incest that’s for sure, but I don’t know where that’s headed. I just get the feeling this is built tension that won’t really go anywhere. You know what was also like that? The Arya/Sansa conflict! I was pleased to be right about this, sort of. I actually think the conflict between them last week was genuine. I think they were testing each other out and uncertain. I don’t think that Sansa came to the full conclusions until this episode, although she might have been piecing it a little together. Littlefinger shows his cards when he pushes a little too far. I think behind the scenes Sansa approached her siblings to talk about it, because they certainly knew exactly what was going to happen when they were in that hall. Except for Littlefinger. Sansa reads off his many crimes, and Bran obviously points out the ones he knows through his sight. The Vale has no inclination to protect Littlefinger, as he admits to killing Lysa to protect Sansa. I think there is something genuine in him saying he loves Sansa, in his very twisted and gross way, but it won’t save him. Arya kills him, slitting his throat the way that Catelyn died, which is interesting. Afterward the sisters talk on the battlements and seem to be reconnecting, which is nice. I thought this is where it would end up, and I am so happy Littlefinger is gone, but hey, high five to Aidan for playing an amazing creepy villain-ish character. He did a marvelous job all these years.

And of course, the ending that I mentioned last week:

There was no other way this season was going to end. This was expected, BUT IT WAS STILL INCREDIBLE TO WATCH, RIGHT? I was completely enraptured by it. It looked incredible the entire time. I’m not sure if that’s blue fire, it might not be real fire but … plasma? Something? I do think it’s fire, but he probably wouldn’t risk burning his own people with it. So I’m not sure, but it’s fire of some kind enough to completely destroy the Wall and finally bring it down after thousands of years. We don’t know the fate of Beric and Tormund, some people are wondering if they’re dead, but until we see the bodies or get a very firm confirmation of their death, they probably are still alive. I don’t know where Gendry is either, I thought he was there. My guess is even if they live, Beric will probably die quickly, maybe even saving Gendry as he owes him a debt.

Next season I assume Jon will come home and reunite with his siblings, the one with Arya will probably be very touching. He’ll find out his heritage and cause issues with Dany. The rest of the cast who said they’d be in the north will head up that way, for a lot of violence and war. I get the feeling we might see the end of that conflict about halfway through the season, and then they still have to deal with Cersei finally to get the throne. I figure a lot of people will die, or at least I hope so. Listen I love this show, and even if they kill my beloved Jaime and Brienne, which I assume they will, but this has always been a depressing everyone-will-die concept. I’d be disappointed if everyone was fine. I’m sure he’ll be even more bloodthirsty in the books. Either way, I’m anxiously hoping next season doesn’t wait until 2019. This season has its ups and downs, although for me it was mostly ups. I had a great time! I do wish he’d finish his f’n books already though. Those are my true love. SIGH.