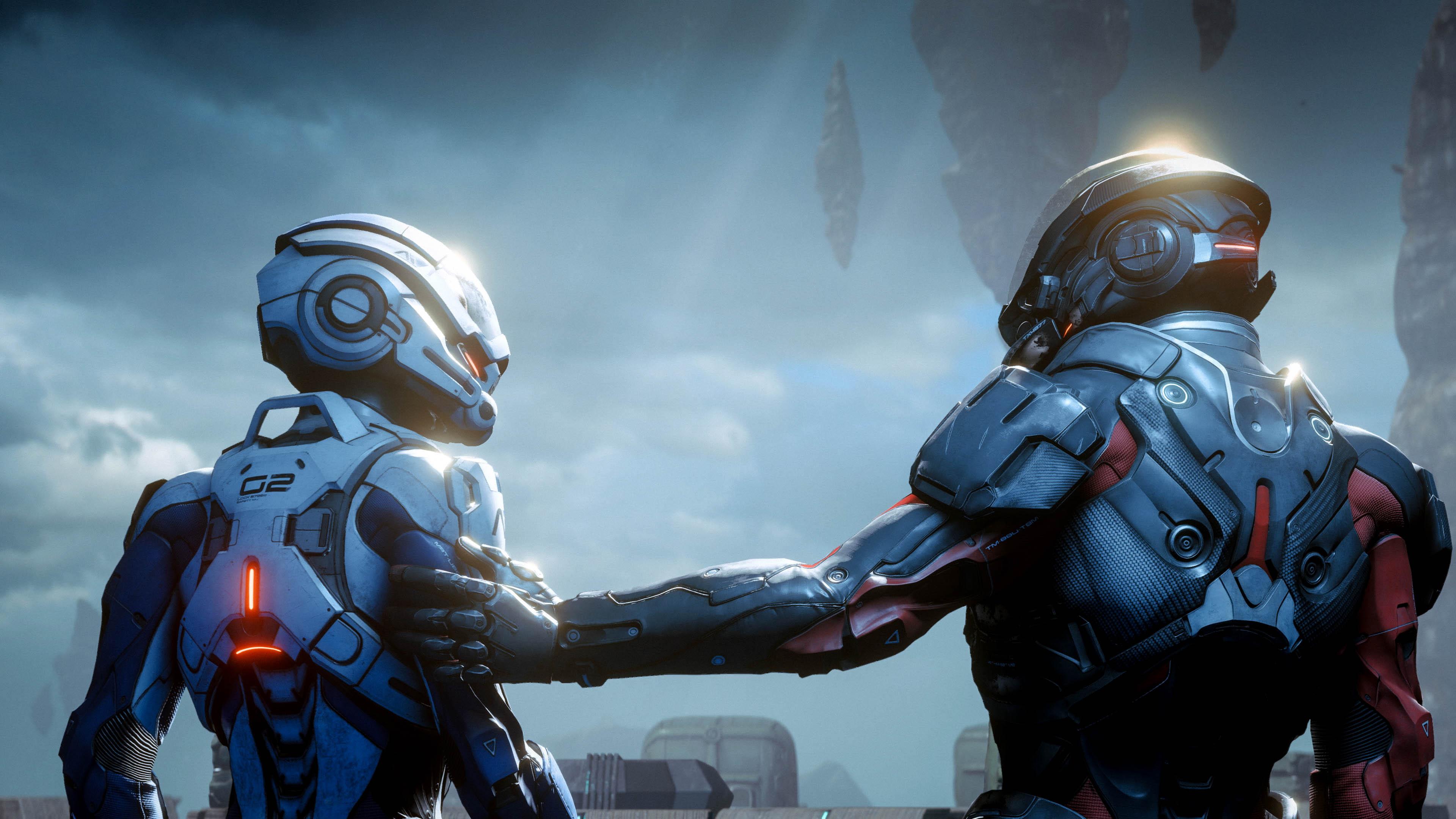 There are spoilers for the Mass Effect series in here. Let’s do it.

So Let’s Talk About is kind of subset of Deeper Thoughts, but focusing on one particular aspect of a genre/material. In this case I want to talk about Mass Effect: Andromeda because it ended up being a controversial game. Controversial aka widely disliked for a variety of reasons. After Mass Effect 3’s ending led to a lot of fury from fans, myself included and one day I will write about it, Andromeda had a lot of pressure on it. This was unfortunate for the new inexperienced team in Montreal who were handed the keys to the kingdom, so to speak. I can’t even imagine how they felt with so much expectation upon them. It was said that a some of them came to Bioware specifically because they were fans of Mass Effect, and working on a game for the series was a dream. But this was their first big game. It took years before this was brought out, but apparently was only deeply worked on for a year, and considering it was released with a lot of errors and bugs, all I could think was ‘oh honey no’ and wished they held onto it a little while longer. Listen, I want my new video games, and I want them now. I get that. I have been waiting for Kingdom Hearts 3 and Red Dead Redemption 2 so long that I feel I’m getting white hairs in their honor. But they’re taking the time to make it so we don’t need an immediate patch and changes from errors. Good choice. Frustrating, but good choice.

Andromeda reminded me a lot of Mass Effect 1. I think people forget how clunky the game was originally, or how shallow the connections to the companions. Much like Dragon Age: Origins, honestly, or the first game of a lot of series. As I was playing, I was like ‘hmmm I’m sure all of this will get deeper and more interesting in the second game,’ because I play the long con. Mass Effect 2 was a masterpiece, and Dragon Age 2 as everyone knows is my favorite. Now Andromeda will never have a sequel, and all that potential is wasted. But I understand that after Bioware’s successfully upped their game in their two major series, so it doesn’t make a lot of sense for Andromeda to have gone backwards in quality. They gave the game to a new team and focused all their best people on other games, it’s almost like they accepted this one would be a wash. So was Andromeda a victim of its conditions and background? The high expectation of fans and the negative backlash to ME3’s ending? The long wait? The immediate bugs in the game? EA not giving enough oversight to the team, or even direction to the team? Them trying out things they didn’t end up using or perfected? Having focus and strength in some areas and then not in others, leading it to be kind of uneven? Hmmmmm.

Let me talk generally about the game for a bit. It’s set in 2819, they’ve been stuck in the Ark Hyperion for 634 years, the plan is to find new areas to colonize and keep the galaxy species alive. This is after ME3 where the reapers devastated so much of the planets, so it makes sense they’d want to look at their options, even if it took centuries to get there. We play as one of the Ryder twins, I went with Sara, and I really like her as a different option to Shepard. Shepard is incredibly competent. She is larger than life. She’s a real person too, and we know how human she really is, but she never is young or naive or struggling in quite the same way as Ryder. Ryder loses her distant father and now has to be the Seeker, the person in charge of their expedition as everything seems to be going very, very wrong. This is how I played her at least. She is very green and listen, it’s no surprise to me that I tend to bond and sympathize with characters who aren’t ready for pressure to be handed it all and just try to scrape by. I’m a fan of the underdog, and Ryder is definitely one of those. She has no idea what she’s doing, and she’s hilariously awkward and surprised when things go right. My favorite moment of her is if you successfully seduce someone and she’s like ???? REALLY? THAT WORKED? Nothing like the confident and commanding Shepard. I love Shep, I love being her, but if I’m being honest, I’m more like Ryder in all her stumbling glory. (Do I see her as more like my precious Hawke? Yeah, basically.)

The cast of characters are pretty solid, albeit shallowly done. There have been complaints that several of the romance options are not as extensive as others, or really as deep or interesting. There are a few that got special attention; they played favorites, I think. I romanced Jaal who was very well done, but I can see why they did a lot with him, since he was a brand new species with new customs to delve into. And I loved his culture. He was like the anti-thesis to toxic masculinity, so of course I was drawn to him instantly. I did really enjoy the companion quests on the whole. Liam’s might be one of the funniest segments I’ve seen in any of these games, I laughed out loud several times during that whole sequence. I liked Vetra and her sister, and if you play it right Peebee’s warming up to having a crew/family is rather sweet. There were building blocks in place, but not a lot of follow through. Bioware is known for its story and characters, so when those aren’t really settled in, it can feel clunky. Then again, Dragon Age 2 has the best characters and plot in the series, but people hate it because of the gameplay. Most people really did enjoy the gameplay of Andromeda though. I’ll admit I don’t really care about gameplay as long as it’s not frustrating. It’s not high on my list. I also don’t care about visual bugs or if it doesn’t look fantastic.

I do see a lot of the criticisms, specifically how all the terraformed planets sort of seem like the same thing over and over just different color schemes. Beautiful though! Yes there were some facial bugs and other little ones, but some of the environments really were visually cool. The generic enemies are mindlessly ordinary, although the bigger villains were decent. There are some glowing moments I really like, such as the conflict wth the angara, the question mark about SAM and those memories, and Reyes vs Sloane. The pieces are there, but it’s almost like they spread their wings too far into open world, and then didn’t fill in enough of the open world to be unique and memorable. And it sounds now like I’m ragging on this game, but I did like Andromeda. I enjoyed playing it. I didn’t do all the sidequests, but I was intrigued with where it was going, I really wanted to see more. I’m disappointed we’ll never get a sequel and give the story and characters time to grow. Bioware has never shown its best work in the first game, outside of Knights of the Old Republic, but they didn’t do one right after the other in that case. Andromeda had potential, but it was ineptly handled, and also seemingly brushed aside by the people who could have put the time in but wanted to focus on new shiny instead. I want to reach out to the Montreal team and maybe hug them, because I think their hearts were in it, and it’s unfortunate this was their first go and they were immediately morphed into another part of EA after the game failed. And I say “failed” as in the general public’s opinion, not necessarily financially. They still say financially it did well.

Andromeda was not a perfect game. I understand why it was disappointing, and the fact it had what felt like rudimentary mistakes is baffling. This game was going up a hill, and it was more or less like they pushed it up half the way and then went …okay let’s just put it out. I think Andromeda deserved a sequel, and Montreal probably could have benefited from some oversight or focus, but it did deserve that chance. There are some genuine gems in it. It has heart and some good ideas. I genuinely enjoyed playing the game. I liked the characters, I liked the general concept, I knew there was more to it that could be explored. But I feel like the only chance this game had for a sequel was to be extraordinary. I really hope this is not the end of the Mass Effect world. It is too rich and complex and interesting for them to close the door permanently. For now it seems like it is. And maybe that’s why there’s a resentful aftermath of Andromeda for some, seeing it as the potential death of the Mass Effect world. Some times you strike out instead of hit a home run, but you come back and get to play another game some day. Crossing fingers that’s the case here.