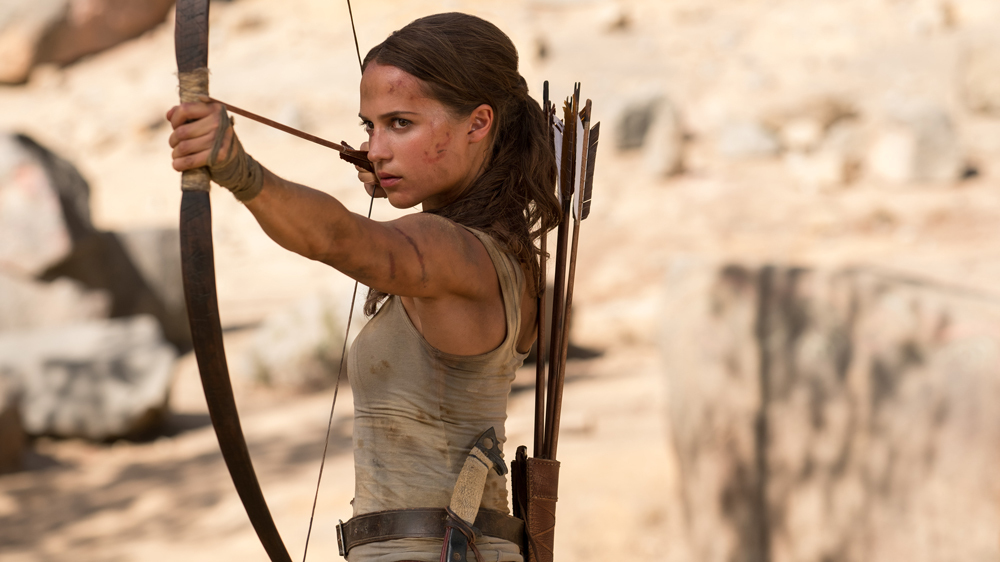 I love Lara Croft. I’ve loved her since the first time I played Tomb Raider, and that love has never been swayed, even with some less than perfect games or with ridiculous things like upping her boob size. Lara Croft herself is great. She’s brilliant, badass, charming, often quite funny, and bold. It’s funny because I’ve never seen her as the ‘strong female character’ trope, the one that often gets criticism for being about how women have to act like men to be strong. There’s actually a lot to unpack about that particular trope, and probably for another day. Lara doesn’t act like men, she is singularly herself. She’s also not a female Indiana Jones, unless Indiana Jones is a classy privileged British heiress and I missed the memo about that. Man I could write a lot about Lara Croft as a character, so let’s just skip over that and talk about the new Tomb Raider movie. This is based on the 2013 video game reboot of the series. The game itself was lauded as a really great reboot. The graphics are beautiful, the mechanics are excellent, the voice acting was superb, and it was genuinely fun to survive her grueling experience on the island and see her become the Tomb Raider legend we knew. So it made a ton of sense that the movie wanted to ride on that popularity and on starting from the beginning of Lara’s story! But did it succeed?

Lara Croft (Alicia Vikander) is in her early twenties and living poorly despite having a lot of money waiting for her at her father’s company. He disappeared years before and she hasn’t come to terms with his death, so she refuses to sign the papers and take over. Instead she follows a clue he left for her to try and find out where he went. Richard Croft (Dominic West) was obsessed with Himiko, the mystical queen of Yamatai. She went to an island, or was exiled there, and he wanted to find it. Lara takes the last of her money to go to Hong Kong and recruit the help of Lu Ren (Daniel Wu); he is a ship captain who is the son of the man that took her father to the island. Lu Ren and Lara start a pretty genuine friendship on their trip into the treacherous Devil’s Sea, and things go sour when a horrible storm sends both of them into the ocean. Lara washes up on a nearby island and she meets the unhinged and dangerous Mathias Vogel (Walton Goggins). He claims to have killed her father after he wouldn’t help them open the tomb of Himiko. Lu Ren, who survived the ship himself, helps her escape Vogel’s men and she tries to survive on the island. She eventually does find her father alive but mentally unstable, as he’s been isolated so long. He claims that they can’t get to Himiko and shouldn’t because it’ll end the world. This turns out to be correct but not quite as mystical as it seems at first, which I like, it’s grounded in reality. Through this adventure Lara becomes a stronger person, comes to terms with who she is and who she wants to be, and learns about the true enemy of her father and herself: Trinity. TO BE CONTINUED (probably not).

First off, I have to mention that it is uncanny how much of this movie was taken directly from the game. Not necessarily in story, although there is some of that, but in visuals and action sequences. I was startled and delighted at how similar scenes were, such as the ship crashing through the storm, and her hanging precariously from a broken down plane over a waterfall. It made the fan in me grin from ear to ear, and I was joking that in the last running sequences I was just thinking to myself PRESS X, PRESS Y, LEFT TRIGGER! The game has a lot more story to it, but that’s because they expect you to be playing it for 40+ hours. This was a wise way to condense it into something shorter. It wasn’t a very complicated plot and that’s what critics seemed to point out the most, it’s really quite simplistic, but I don’t think it needs to be complicated and deep. It’s an action survival story. It’s entertaining, not Oscar-winning. Alicia does a fantastic job as the young Lara Croft. There were several truly disgusting things posted on the internet from actual “journalists” about how she didn’t fit the body type and therefore wasn’t believable. There’s a loooong history of issues regarding Lara’s body and the male gamers who think they own it, so I’m not going to get into it here. But Alicia really perfectly represented the young, inexperienced, and vulnerable Lara as the survival required in this story turns her into someone else.

One of the criticisms I’ve heard that I absolutely agree with is the lack of female presence outside of Lara. This comes primarily from the fact that the main character/partner for Lara in the game itself was a woman named Samantha. She is Lara’s close friend and a major part of the game, so it did seem a little questionable that they cut her out and replaced her with someone else. This isn’t against Daniel Wu, who is very charming as Lu Ren, but there really was no reason it couldn’t have been Sam. Did they think a movie starring two women would be too much for audiences to swallow? The badass woman quota was filled by Lara herself, no other women can be there! Anyway, it is a shame. If they do a sequel, maybe she could be introduced there, although I’m uncertain if the movie make enough money for them to consider doing a sequel. Which is too bad, because it really was a solid film. The actors were all great. It’s by no means perfect, but it was entertaining and well shot and I enjoyed it. Sometimes movies just have to be a fun time and don’t need to be extraordinary pieces of art. Then again, I liked the Angelina Jolie movies too. I love Lara Croft, so sue me.

I suppose if there’s not another movie, that’s fine, because there will be more video games in the series, so I’ll always have that.