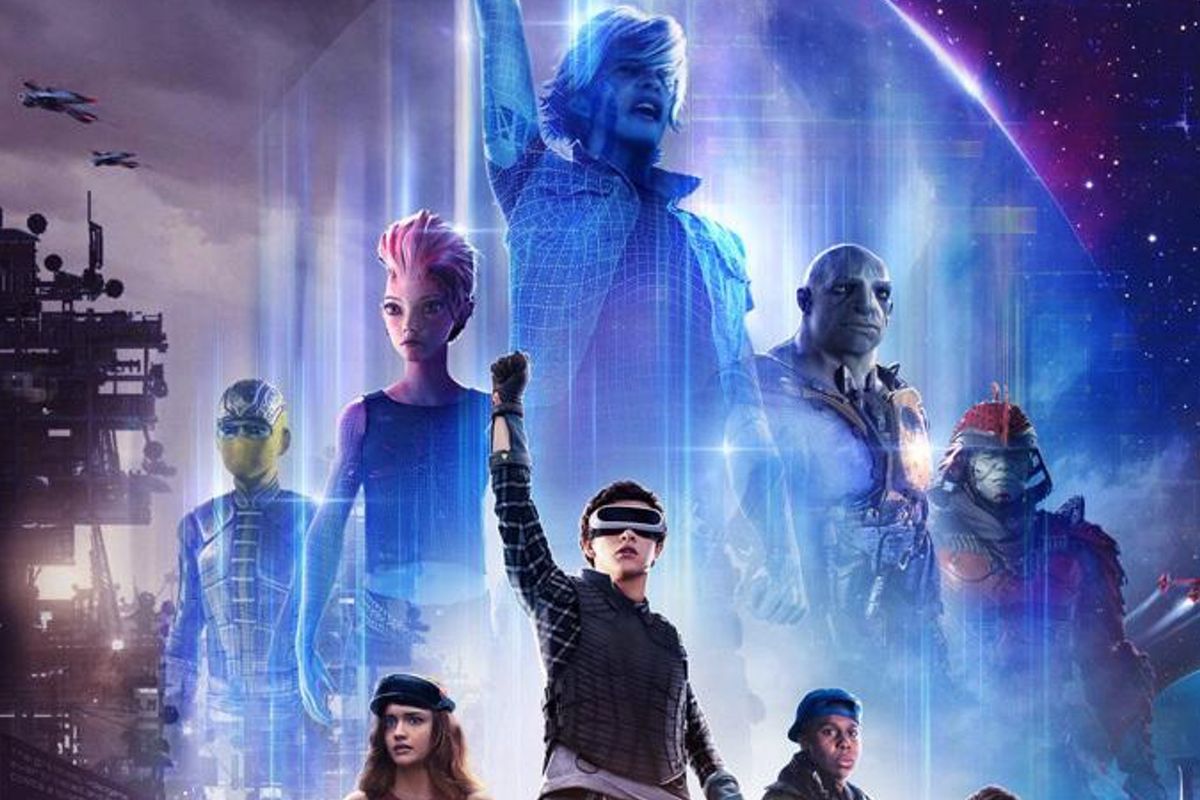 There are spoilers in here for the movie and book. You have been warned.

Wow well there is a lot of unexpected baggage that goes along with this movie. There was a very interesting article about how the response to this book/movie, or rather the backlash, may be a direct reaction to GamerGate, and that would explain a lot to me. As someone who remembers Gamergate with anxiety and fury, I can absolutely see how a story aimed at gatekeeping white nerdy men would leave a bad aftertaste. When I read the book, I didn’t think too deeply about what it said about geek culture, because I was used to that being the default. Generic white nerd saves the world and gets the girl. We’ve seen it a bunch of times and my brain is programmed to just accept it as part of the genre by now. And I liked the book! In spite of some of its glaring flaws, it was an easy read and there were some genuinely great ideas in it that kept me interested until the end. I suppose the truth is I didn’t take it seriously enough to break it down into an analysis. A lot of people have done that for me now, who are far more articulate, so go google opinions and you’ll find the great ones. This is my much more shallow and general review of what turned out to be a very contentious film.

Wade Watts (Tye Sheridan) lives in a futuristic world where poverty is everywhere, hopelessness is high, and most people including him actually live online in a free universe called the Oasis. Its creator James Halliday (Mark Rylance) was an awkward and shy nerd who was obsessed with the 80s and with his mistakes, including loving his best friend’s eventual wife. She was Kira online, and he blew his chance with her and always regretted it. When he died he said he would leave his vast fortune and control over the Oasis to whoever found the secrets he hid within the game that led to the easter egg. Everyone’s trying to get it for a variety of reasons; Wade wants to because he worships Halliday and the money is his ticket out of the constant poverty he and his aunt live in. There are several players who are well known and as sharp as he is, including his best friend Aech (Lena Waithe), the girl he’s obsessed with Art3mis (Olivia Cooke), and Japanese players Daito (Win Morisaki) and Sho (Philip Zhao). Wade figures out the very first clue during a racing match, and it pushes him into celebrity with all the other gamers.

Meanwhile an evil corporation IOI run by Nolan Sorrento (Ben Mendelsohn) is trying to solve it for themselves, sending tons of employees constantly in the game to win it. He has some of the best minds, but somehow they don’t figure it out. He wants to use the Oasis to get money using ads, removing the freedom of the Oasis that everyone can be a part of. He tries to persuade Wade to help him, and then kills Wade’s aunt while attempting to kill him. Now Wade and his friends have to dodge Sorrento and try and solve the Oasis puzzle, not really for selfishness anymore, but for the safety of the Oasis and to honor Halliday. Most of the puzzles surround Halliday losing his chance with Kira, and it is supposed to teach Wade a lesson about how to live his life. So basically it’s mediocre white boy saves the world and gets the girl. The end. With excellent special effects and some very cool looking set pieces.

The movie changes a lot from the book. People are so focused on talking about the problematic aspects re: his obsession with Art3mis, and I’m surprised fans aren’t frothing at the mouth more about the huge changes. A friend referred to it as fanfiction of the book, and that sounds about right. I could make a list of all the things they changed, but it would be longer than this article honestly. It resembles the book in vague ways, but clearly Steven Spielberg wanted to go his own way. This is necessary because the wider audience he wanted to appeal to does not want 2 hours of all obscure 80s references. I know the 80s well, so I often smiled at the references in the book, but that niche audience is not going to fill all the seats. They added in the Shining for example instead of WarGames, which frankly was a much better scene. Of course I’m terrified of the Shining so I just wanted to close my eyes and shake during that whole scene. The one change I did not actually like was about the overall plot. See in the book  they get into IOI’s corruption more clearly and the fact they want to change the Oasis to a pay for service, meaning the one thing that the poor still hold onto would be taken from them. Also all public schools and many careers take place online. They do show how IOI uses people to pay off their debt by working in the Oasis, but it’s not as nefarious and widespread as in the book, where their power and influence blankets over the world. So the stakes were a little higher in the book, that’s what I’m saying. They attempt the whole storyline of “okay live in the real world and less online people” but it doesn’t quite fit to be honest. This was cotton candy. It was entertaining and shiny, and I think people want Spielberg’s stories to always mean something. But sometimes he just wants to be silly and pointless. This isn’t the first time he made a movie that was harmless and lacking in depth. I’d say this is a pretty forgettable movie overall, and I think that rightfully disappoints a lot of people who were hoping for more. I do want to mention some stand outs though. Mark Rylance as Halliday and Ben Mendelsohn as Sorrento do an excellent job here. They really seem engaged and you can feel it in their scenes. I think Rylance in particular was having fun because this is so irregular for him in terms of parts he plays. They pulled out some of the most misogynistic aspects of the book – there are parts of the text I actually cringed at it was so unnecessary – and even gave one of the major plot points to Art3mis instead of Wade. I wish we had a lot more time to see Aech because Lena Waithe is the best. The thing is, the book and the movie have a lot of genuinely interesting characters in them. It’s just that Wade is literally the least interesting person in it. But he’s the protagonist and that can be frustrating when you go “I want more!” of this other person, and instead spend the entire movie with him.

That’s generally it. It was a good few hours for me, I had fun, but it’s not one I plan on seeing again. I understand the disappointment of fans, and also the response to the problematic parts of the story. That all makes sense. In the end, the movie and book aren’t important enough for me to have a strong opinion either way.