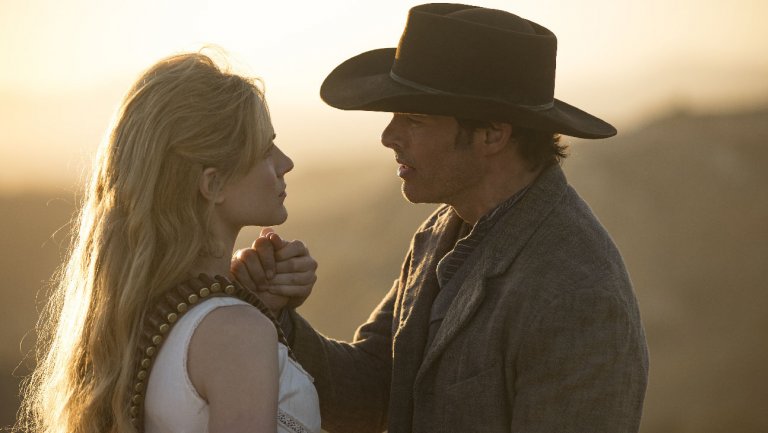 There are spoilers in this review!

I have a lot to say, and hopefully I can say it coherently, because Westworld has a tendency to turn me into what no doubt seems like a mad woman screaming about conspiracy theories. Because the show rewards you for conspiracy theories! I remember watching season one and all of the fandom writing huge think pieces about how the Man in Black was actually William  … AND IT WAS TRUE. I love this show and I was hyped for the return. This premiere was a perfect lead in to what will no doubt be an explosive season. Sooooo previously on Westworld: they showed us how the robot hosts were slowly becoming self-aware after decades of abuse from their human overlords. The 1% are the only people who can afford the hefty price of coming to this park and playing out fantasies. Those fantasies often involve murder and rape, so the aware hosts as you can imagine are kind of angry about it. Dolores reached the end of her personal maze and killed Ford, which he wanted. Maeve was going to leave, but she turned back to go find her daughter. The army of hosts at the headquarters were brought out by Maeve and slaughtered people there. At Ford’s celebration Dolores tapped into Wyatt and all of the people there were being slaughtered too. William got shot in the arm and looked super happy about it because now his game had real stakes, dude is so messed up. So the reckoning has come! Let’s get started. 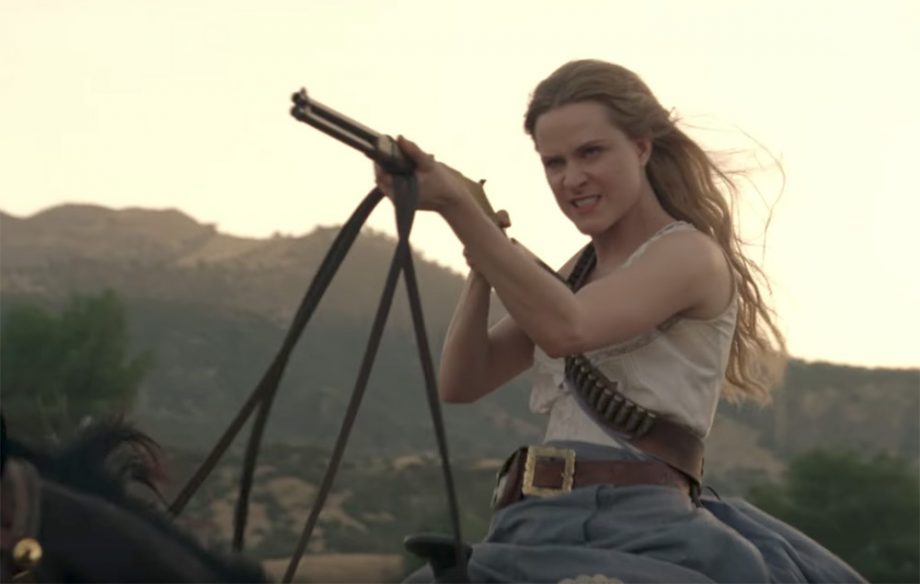 They have different timelines right away, so now they’re being up front about it, which I appreciate. I’m sure there will be other kinds of conspiracy theories to come. We see Bernard wake up on a beach and approached by the human security. They say it’s been weeks since the incident, but he doesn’t appear to remember anything. I’m just going to quickly talk about this particular storyline as it’s in a different time. They find all the bodies at the town and then track the host signatures. Out of no where there appears to be a new lake, and all the host bodies (including Teddy apparently he only knows how to die) drowned in it. Everyone seems pretty startled, but Bernard says that he’s the one who killed them. I think how we can tell them apart is that Bernard has no glasses in that storyline, and glasses in the past. They also find a tiger randomly dead on the ground, which they say comes from another park so they don’t know how it got there. I also want to note that I snorted in laughter because I forgot no one knows Bernard is a host since that was Ford’s closely kept secret. Although wouldn’t some of the higher ups realize that he was identical to Arnold? Or was Arnold always too secretive and isolated? We have a new lead character in the form of Gustaf Skasgard, he’s in the security detail who finds Bernard. It kind of makes me smile to see a Hemsworth and a Skasgard together, those families are everywhere!

Flash back to the rest. Bernard actually manages to escape with Charlotte and some others, his hands shaking because robot brain fluid is pouring out of his ears. All of the people with them get slaughtered, but Charlotte sneaks them away to a secret chamber. She had her own agenda, as we aren’t surprised by, and I think she’s the one who send Maeve out of the park. Bernard pointed out to Maeve that her desire to leave might have been controlled, but she didn’t believe him. Still, because of this Charlotte didn’t finish her job to get whatever was in Meave’s head out of the park, and that means no one is going to come save her from the disaster. Whoooops. But she says  that Dolores’ father is the key? So maybe he was supposed to get out? I don’t think so, it really feels like it was Maeve. EDIT: Last season I missed that Charlotte and Lee DID use Dolores’ dad to store in the info. We still don’t know who programmed Maeve. This is thanks to Julie! Bernard manages to sneak some robot fluid into his brain before Charlotte notices. We know that Bernard eventually wakes up alone, so we don’t know what happens to Charlotte yet.

They seem to be splitting people up into groups, which makes sense – Hector, Maeve, and writer Lee; Dolores and Teddy; Charlotte and Bernard; and Man in Black doing whatever he feels like.

Maeve of course is burning up the screen with her awesome. She comes back to the headquarters and finds Lee there. She saves him from a cannibal, and he is shocked that she is self-aware. He agrees to help her find a better map so she can look for her daughter, although he’s also surprised to find out she cares about her “daughter” as that was a past memory. He can’t really connect yet that she’s the real deal, but he’s starting to get it a little bit. He almost gets her in danger with some soldiers who come in, but another host comes help her. She does decide to let Lee live a little longer and come with her into the park. She meets back up with Hector who is still alive and he agrees to go help her find her daughter. They prepare to go back in. She first makes Lee strip in front of her, so hey we get naked dude, which as we know rarely happens in comparison to women. It’s clearly a power play on her part, to make him do what he’s done to them for years. I am interested in seeing what this group accomplishes once they go in, and also interested if Lee ever gets to a point where he starts seeing them differently. BUT WHERE IS FELIX?

Our other power couple is doing a lot of bloody vengeance. Dolores is hunting down everyone who managed to survive the slaughter. She does this pretty awesome speech about how the humans used them, and how she has their programming still inside of her but she’s making her own decisions now. Teddy questions whether what they’re doing is right and if this is really what she wants. He says they could just find their own corner, but she knows that’s not in the cards. She wants to go to their world and dominate that as well. It’s interesting because she says she remembers everything now. In the promo at the bottom here, you can see that eventually we have more of William and Logan in the show, and that means Dolores may have actually been in the “real world” at some point. So if she remembers everything, that would explain how she knows about the outside world and how to deal with it. We are definitely going to get other parks too at some point, which is exciting. Dolores has a nice speech to Teddy about how he’s her constant and she loves him, and he agrees to follow her anywhere even if it’s bloody all the way through. I think the cool thing about these two pairings is that the women are the dominant force, and the men are like I’ll hold your purse sweetie go get ’em. I also like that they’re self-aware enough that they don’t need to love each other anymore, but they still choose to. Dolores and Maeve for example are aware that their relationships with these two men were programmed into them, but they still do choose to be with them, and I like that. Maeve did warn Hector she might use and abandon him again, and he doesn’t care. I’ve never had two canon pairings I liked this much, so I’m pleased.

Oh also the Man in Black/William is up and about. He survived, kind of psyched now that he finally gets to play a real game. Little robot Ford talks to him about how he made it for him, and now there are real stakes. William seems genuinely pleased as punch but hopefully we get to see him die horribly later on, because that dude is pure evil. We’re apparently going to see how he got to that point from the one Nice Guy he was. I want to side note that we finally see how the robot brains look like, they’re grossly realistic. But seriously show, why you have to scalp a Native American? Seems needlessly callous, although obviously very intentional.

So there’s a lot going on and this was great set up for what’s coming! What happened to Bernard in those two weeks (and everyone else)? How did the lake come to be and all the hosts dead? What is Dolores’ plan to get into the real world? Did she go into it with William in the past? Will Maeve ever find her daughter? Is Bernard going to be okay or will more fluid leave him? What is up with Charlotte and whoever she’s working with? When do we get to see all the other parks? As usual I do want to point out how fantastic the acting is in this show. Everyone is killing it, but special mention as always for Evan Rachel Wood and Thandie Newton who own every single scene they’re in. When do we get to see these ladies come back together? Generally I appreciate how the show is doubling down on questioning what is real, what makes a person real, speculation on the soul and self-awareness.

Westworld is back and the next few weeks I will be probably screaming about it. No regrets.