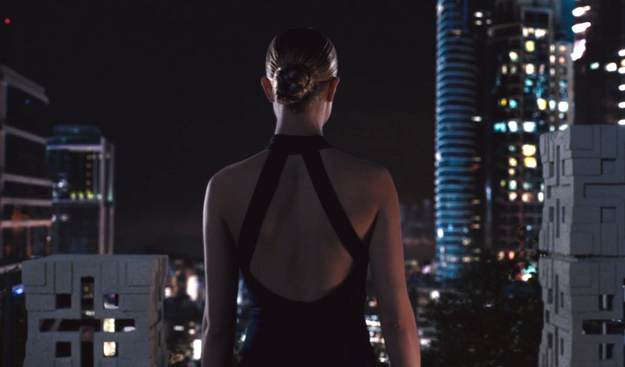 Let me tell you something: I love lore. I love history. I love learning the building blocks of a world I’m already invested in. I think other people get impatient with it, wanting more action or plot to move, and instead I’m like yes pause this and tell us where it started, feed me the deets. Westworld didn’t disappoint. The past is as open to them as the future. This episode flashes us back to what happened after William decided to embrace his roots as secret evil megalomaniac and the things Dolores remembers now which is setting her into a mirrored state of sorts with him. Hey, they used the mirror idea, I’m just adding to it. Previously on Westworld, Dolores has gone on a path of vengeance now that she can kill the guests and she remembers everything that’s ever happened to her. She’s dragged Teddy with her, who is trying not to be terrified of his love but she is terrifying. Maeve and Hector met up again and they dragged writer Lee with them back into the park to find her daughter. Old William is being taunted by Ford. And in the past, young William turned cruel because he was a Nice Guy not a nice guy and eventually became the owner of the park.

So! First up let’s talk about the flashbacks as they are most of this episode. We go back to when Logan got sold on the idea of Westworld. He didn’t believe it was possible to have such believable robots, but they prove it by having an entire room of hosts freeze at once. This definitely sells him on it. He persuades his very wealthy father to invest, but awhile later his father visits the park and is less impressed. By that point, William has become a power player and convinces him to invest for real. Why? Because in the park guests think they’re safe to be bad, and they also might give some details. So basically the hosts are recording everything they do and they can use that in a bunch of ways. I’m guessing that one day they’ll start replacing humans with hosts, that seems like the natural evil progression. Bring the President there and then replace him! Muahahha. For now all we know is they have that information, but there’s definitely something higher level going on. Dolores was witness as Arnold brought her there, and then so did William when he decided to have her around would be fun. While his wife and child were there, because he’s a creep. Dolores runs into Logan, who we hadn’t seen since William sent him naked off into the wilderness. We don’t know what happened to him, outside of him being drugged up now and more bitter than anything. He thinks the robot apocalypse is coming eventually and at this point he’s like yeah humans deserve it, I’m on your side, girl. William wants to show off his new “weapon” or rather whatever he plans on actually using the park for. He can’t help mocking Dolores first though, because few things are as petty as insecure egoists. So he shows her whatever it is, assuming that it’ll never come back to bite him in the ass because he controls the park. Whoops!

Back to post slaughter, Dolores breaks into a place where some of the scientists are working on corpses. She shows Teddy that he’s died many, many times, so many times, poor Teddy, and he’s starting to grasp what’s going on, but having a mental breakdown in the mean time. He attacks the engineer and asks why, and his answer is fun, and you are super lucky Teddy is most of the time wired to be a sweetie pie. Because terrible answer, man. Dolores wants to bring the Confederados to her side. She sends one back to them and then goes, and they say they basically only follow God and generally are creeps, because that’s how they roll. Dolores rolls as a manipulative power house now, so she has her team kill all of them, and then the technician brings them all back. Now shocked at what happened and the reality, she basically is like ‘I’m God now, k?’ And uh … yeah. You are. Anyone feel like she’s more Lucifer like than anything else? She isn’t a savior so much as a vengeful demon, and that isn’t an insult, I love her this way. She wants to destroy everything. She hates her maker and wants to lead a revolution. A little devil like, just saying. Briefly she runs into Maeve earlier, who isn’t actually interested in vengeance right now since she has a bigger plan in mind. Maeve’s rather empathic, isn’t she? Man I love her. She has her head on so straight and every line she says is filled with awesome and truth. We needed more of her this episode!

Dolores takes Teddy to wherever the “weapon” or truth about the park is. Or rather something William left there that can hurt the human world. Meanwhile Old William is trying to figure out a way to deal with the same issue, which he admits is a weakness/mistake of his. He finds his old pal Lawrence, but when he tries to manipulate the system for help, Ford reveals that even after the grave he continues to be a huge troll. He purposely kills everyone who could help William, having the hosts all shoot themselves. Sorry dudebro. You gotta do it on your own. This made me laugh out loud. This is all still two weeks before whatever’s going on with Bernard and the people who are trying to retake the park. So we haven’t seen the flooding or what caused it.

I really love this show.  Who knows where it’s going. I don’t know what the weapon is that she can use against humans. It could just be some kind of nuke? But I’m skeptical that it is. I do know eventually we’re going to end up in other parks, so I wonder when that comes up. I am just waiting for William to get what’s coming to him. He’ll probably make it all the way to a confrontation before she finally gets rid of him. Maybe they’ll get rid of each other, although I’d prefer it only be him. I did find his speech about how she just reflected at him who he was interesting. People do like looking at themselves, that’s true, and it really is how he now has embraced his narcissism. It’s generally interesting to see how they are deconstructing someone who was generally a ‘good person,’ but Westworld is all about what it brings out in people. And obviously William is the chief example of how it brings out the worst. It’s still so sad to see him taunting and being awful at Dolores. He did it for decades, we know that much. So a reckoning is coming between them. I also wonder how long it’ll be before Teddy starts backing off. He’s already shown a lot of hesitance and doubt, and I don’t disagree with him at all. She’s terrifying. Awesome, but terrifying. Maeve really got to him I think with that “do you feel free?” because he doesn’t seem it currently. He’s on a dark path that’s not his own. I hope next episode we have a lot more Maeve.