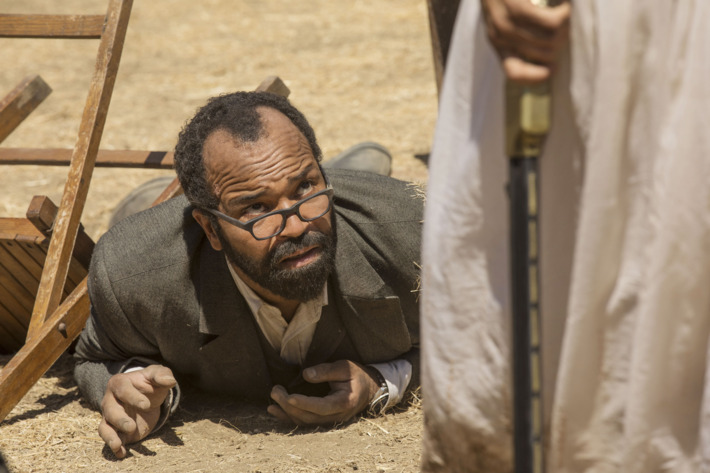 If anyone was like me, and as I was following the hashtag on Twitter and Tumblr I know there were plenty, I seal clapped when I realized what was happening on the screen. The cold open was not surprising, in the sense we knew there were other parks coming, but it was still a delight. And then they kept on giving from there! It is not shocking to me that we keep seeing the ideal location for the privileged white rich in these parks. Of course they would want some colonization dream of living in other cultures yet keeping all the power. I didn’t expect India to be the most obvious next step, we had already seen Samuraiworld as an option, but now we have to wonder at the others. In the movie they had a Medievalworld and a Romanworld, and those would definitely make sense as options for these park goers. But I’m getting ahead of myself! Previously on Westworld, Dolores has gone on a rampage and plans for world domination, a la cylons. I’d love to see her and Six together. Maeve and Hector yoinked writer Lee and are off to find her daughter somewhere in the park. We have time flashes with Bernard who is really out of it, when he’s right after the massacre with Charlotte, and then a few weeks in the future when the soldiers are piling in to take the park back. Charlotte says they need Dolores’ original father Peter Abernathy because he was uploaded with the info they needed to get out of the park. And they saw a tiger wash up on shore that was from another park.

So the episode starts out in the India park. It should be noted they were playing Seven Nation Army underneath these scenes and I was privately freaking out. Love that song. We see that guests are always kind of dicks. Grace is a rich woman who doesn’t want to sleep with the hosts because she feels it isn’t authentic, so seduces another male guest. They go on a safari together when the hosts start to malfunction and kill everyone. He dies while she manages to live, but then she sees a tiger who chases her to the edge of a cliff. They fall over it together, and that’s the tiger that washed up on Westworld shore. So these parks are very close together, closer than I expected. It makes sense they’d want them all in one spot though. This also informs us that it’s not just Westworld that malfunctioned. It looks like Ford probably messed with all the programming and let them go wild. He is the biggest troll from the grave I’ve ever seen.

In the timeline right after the massage, Bernard and Charlotte manage to track down Peter Abernathy who is being held by some bad guys. They reprogram one of them to kill the others, but Peter refuses to leave since he’s a sacrificial sort of dude. Also he’s glitching big time. Charlotte sees they’re in too much danger and bails, leaving Bernard and Peter behind. Luckily they are taken to where Team Dolores is stationed having allied with the Confederados. She wins the Colonel over with her army, and also by handing over a machine gun to prove they’re overmatched by the soldiers coming in to take the park. She advises a dangerous plan where they’d have to retreat at some point. They should’ve been ready for her sudden but inevitable betrayal though. Dolores knows they’re not the type of people you trust, and she says cold heartedly not everyone deserves to make it. She is more and more rising to be a villain, but one that I’m still like GOOD GIRL. YOU GO BURN IT ALL DOWN. Plus, those men are in fact untrustworthy. She could probably have reprogrammed them. I would have done that, made them all easier to handle. She tells Teddy to take out the rest of the trash but he’s like … this is getting out of hand. For the second time someone gets him shook by pointing out he’s not happy about what’s going on, and she’s just dominating him. I think this is setting up a point where Teddy’s not having it anymore and Dolores will likely go oh well, boo, it was good while it lasted.

The real emotional kick of this episode came from the reunion between Dolores and her father Peter. She now remembers everything, including that he played her father for a very long time, and clearly that’s how she still views him. He was the first one to start glitching and infecting the other hosts. It reminds us that somewhere in there, Dolores is still the farm girl who believed in good and justice once, and that there may be a glimmer left. Bernard is there and agrees to try and help him, but keep in mind Bernard is also messed up in the head and doesn’t really know where his loyalties lie. He’s never fully dealt with the fact he’s a host, and he seems in a permanent state of fear and confusion. Poor thing. Charlotte and co. do manage to sneak Peter out while they’re all distracted, leading Dolores to freak out, and whatever she does from there it looks like Charlotte does not get to keep him. Because in the future timeline a few weeks later, she’s surprised to see Bernard, and does not appear to have Peter. Yikes. Bernard in the past starts to pass out since that brief fix with the brain fluid didn’t last forever, and Clementine knocks him out. I’m not sure what she plans to do with him.

Lee just doesn’t seem to get that the hosts are officially self-aware, does he? I understand it’s hard for his mind to wrap around, especially since his life has been writing stories for them. But he really should figure it out while he’s in the midst of working with two of them. They run into the Ghost Nation, which remember he created so it’s a little funny, and they want him. Is it because they know he’s a guest? Is it because on some level they know he created them? I’m guessing so for the latter, if they’re self-aware too. Hector tries to talk them down and then they have to flee to the underground. Lee freaks out because he doesn’t understand how the two of them can be in love when he programmed them otherwise. We also get a little insight into him, because he wrote Hector to be the person he wanted to be, and had the tragic love story because he lost her too.

BUT THEN WE GET FELIX REUNION. Felix and Armistice are alive! Oh and Sylvester too. I’ve been frantic waiting for that sweet soul to show up again. I’m pretty sure he is regretting what he did now, but at the same time, maybe not, because Maeve is there. I wanted a little more of a reunion with them, something touching, but they haven’t gotten enough time for it. The newly added trio follow them up to the main floor, but they are surprised to find themselves in a completely new place. With a decapitated samurai head. So we didn’t just get one park, y’all, WE SAW TWO.

I like that Maeve and Dolores continue to be two sides of the same coin. They are our protagonists, the leaders of the story. One started out darker than the other, but it looks like they’re crossing to opposite sides now. Maybe because Maeve’s motivation is out of love, and Dolores’ motivation is out of hate. I am very interested in where this is all headed. And we get to see parks! Ahhhh! Can someone please help Bernard? I’m worried about him. Thanks.