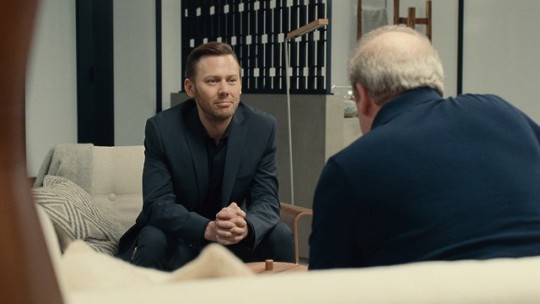 Okay so usually I have all the timelines down, but I’ll admit there is at least one or two moments in this where I had the moment of WHAT THE FUCK DOES THAT EVEN MEAN. It’s not Westworld if they’re not trying to mess with your head. This was a Dolores and Maeve free episode and while there were some really great things (namely everything to do with Bernard and Elsie), I’ll admit I really don’t care about Man in Black/William. I also side eye the very implication that he’s redeemable or that’s where they’re headed with him. I had some satisfaction in seeing his interaction with the trolling Ford at the end, where he more or less was like … ehhhh I was helping out for my own purposes. But I hope no one forgets what a monster he is at the same time. So previously on Westworld, Ford is still trolling William from the grave. He’s trying to get to whatever the “weapon” was that he showed Dolores with Lawrence. Bernard is glitching hardcore and he was yoinked by Clementine somewhere unknown. We thought Elsie was dead but surprise! William’s father-in-law was convinced to invest in the park, and he was dying, so it seemed likely there was a blend of immortality and also blackmail on everyone involved.

ELSIE IS ALIVE. This timeline is the one right after the massacre, because it’s when Clementine yoinked Bernard from where Dolores is. And we see Elsie. I am so glad to see that because it was super cruel of Ford to force Bernard to kill his protege. Instead she’s just been kept captive while Ford probably finished the rest of his plans. Luckily for them, because Elsie has the ability to help the increasingly glitching Bernard. She didn’t know he was a host until now so while she doesn’t trust him, I think she at least understood it might not be completely his choice what happened to her. On the other hand, he’s glitching and who knows what programming is left in him at this point. So Elsie helps him with his brain fluid, but she warns him he’s basically malfunctioning and needs more help with that eventually. Elsie and Bernard figure out that the cave they are in is an old bunker as he keeps flashing back to the past, and she tells him his brain is glitching in a way that he’s moving through timelines mentally and not realizing when he is. Classic. It gives us the opportunity to be confused about more timelines! Yay!

So we deal with a lot of William and the original owner James Delos. They are working on finding a way to put Delos’ mind within a host so he achieves immortality while his body is dying. It isn’t working however. He died in real life, along with most of his family, but his host body keeps glitching and they can’t stabilize him. So William gives up the experiment when he’s Ed Harris. He also informs us of some things, like James’ wife dying, his own wife Juliet dying (she killed herself), and Logan overdosing at some point. Does this mean no more Ben Barnes? Aw. I think we’ll still have more of young William. Delos’ whole situation reminds me a lot of Black Mirror. The weird thing is that James’ last self seems to still be alive when Bernard and Elsie break in, although they get rid of him then. Elsie agrees to help Bernard if he promises not to hurt her, although obviously she will still keep her eye on him. Wisely. He flashes back to when he stole a control unit from that room and then had all the technicians killed. No doubt on orders from Ford, and there are a lot of questions about what control unit that was. Is Ford coming back? Is he actually already back so he’s been actively trolling while somewhere in the park? It would make sense that Ford could complete the experiment and not give William the answers. William meanwhile goes through the process with James and at the end is like eh maybe men weren’t supposed to live forever. Well, yeah, bud.

So over to old William. I actually figured this out very early in the episode. I’m not just saying that. She lived, which means she was important, she knows a ton about the parks and all the secret locations. He kept bringing up his daughter Emily and how they became estranged after his wife’s death. So it only made sense that “Grace” was her. It’s interesting she was hanging out in Eastworld while her father is obsessed with Westworld. She seems to despise the parks that her father helped create, so what is she doing in there? I don’t think she was in Eastworld for the reasons people usually are. Is she part of Charlotte’s plans so she can stick it to her father? I guess we’ll find out. Meanwhile the old William goes to Lawrence’s village where that jerk Dolores betrayed and Teddy let live is taking out his bitterness on the villagers. Hey Teddy, this is where your “mercy” ended up, babe, other people suffer because you let that psycho go. Old William has a slight change of heart when they’re torturing Lawrence and playing power games with his wife, and he helps save them. Like I said at the start, I hope they don’t think they can redeem this character, he is trash. Little Ford possessed girl says up front that it’s not redemption, and he’s like ehhh I wasn’t looking for that. Good. Because you’re not. William heads off only to run into his daughter as pictured above.

Also earlier Emily was captured with Ashley Stubbs by Ghost Nation, who don’t kill them and only seem to be killing Hosts. Interesting. They are messing with their heads and I find their motivations very interesting, whatever they are. Hopefully we’ll get more answers on that. Emily escaped and left the others behind. So that’s the summary of the episode.

Next week we get Maeve in Samuraiworld, and I am SO EXCITED I CAN’T EVEN. Look at her she’s amazing. I missed my ladies in this, but I do think what they showed us this week was important, even if I’d rather hang with Maeve and Hector. I am pretty suspicious that Ford is alive and put his consciousness into a host. Or maybe he’s in the system, who knows. Maybe this is why Bernard was just based off Arnold and not actually Arnold, because it was too impossible to force an exact person onto a host. Where they are headed with William and his daughter I don’t know, but she dislikes him, as well she should. Her motivations I’m waiting to see more about. This was a good solid episode but I don’t care about William much so I just want next week to come. ALSO ONCE MORE BECAUSE THIS IS NECESSARY. ELSIE. IS. ALIVE. They better not kill her again immediately.