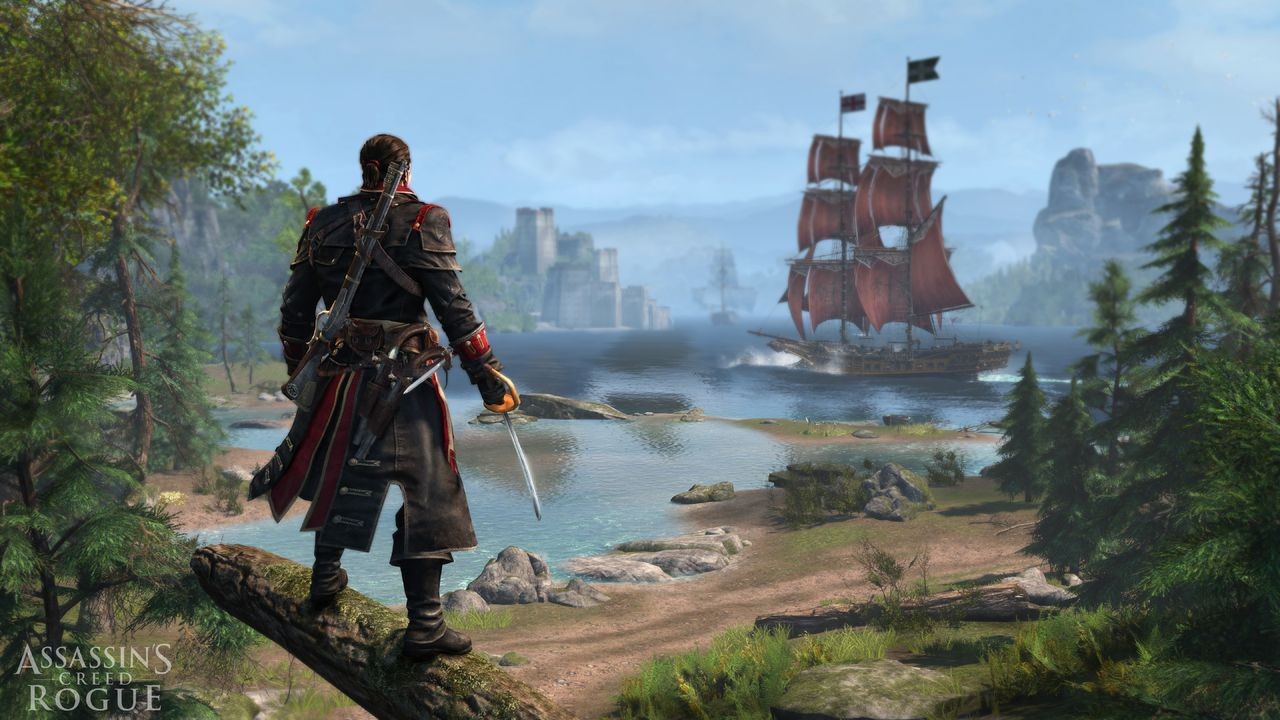 I missed Assassin’s Creed: Rogue when it came out originally, and it was one of only two ACs I didn’t manage to play. The other is Assassin’s Creed: Liberation, and I doubt I will get the chance to play it. But I was delighted when I heard the remastered version was coming to PS4. I am a huge AC fan. I love the lore. I love the characters. I mostly love the gameplay, although if you read my AC: Origins review you’ll know that I could not handle eagle sight. I also was terrible at ship battles at first. I will hand it to this game: while I am 100% an assassin’s guild girl, I felt like I understood the templars a lot more after this game. Or at the very least didn’t mind playing as one for a game. Shay was a really strong character with genuine motivations, but I will still never, ever forgive them for making me kill Adéwalé. No. Unforgivable. The rest? Slightly more forgivable. 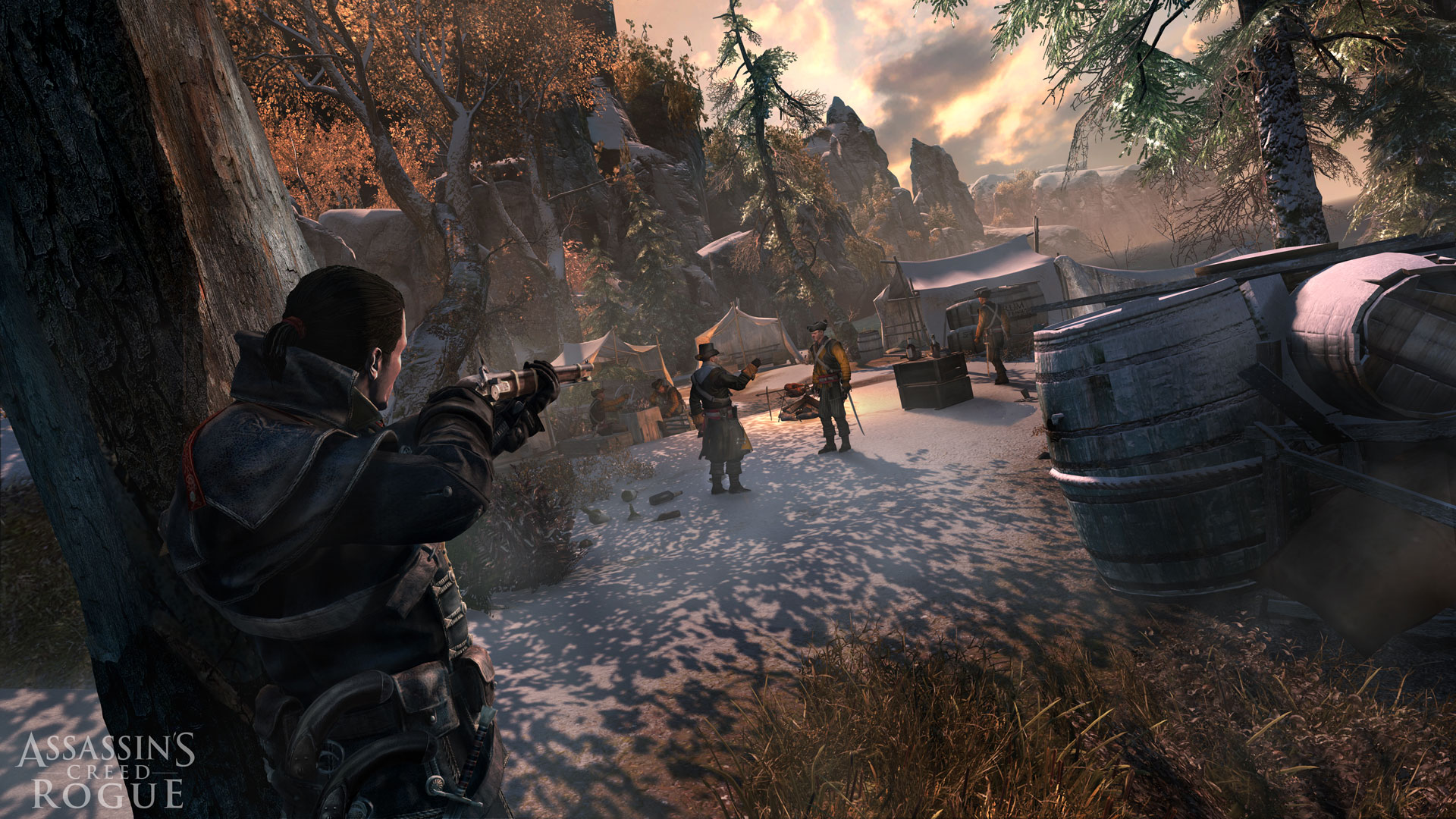 So the story is that Shay Cormac is an Irish assassin and gets along very well at first with his assassin friends. He’s a little lazy and carefree, but he’s young and arrogant and doesn’t really question what he’s doing. His best friend Liam, and teachers Hope and Kesegowaase, all come back later in the game, so don’t love them too much, I warn you. He is tasked to go look for a Piece of Eden by assassin leader Achilles Davenport. While in Lisbon, the piece goes wayward after being touched and completely devastates the city with an earthquake. Shocked and guilty, Shay confronts Achilles, realizing that a mention earlier of a city being destroyed was also due to the Brotherhood. When Achilles makes it clear they will not stop looking for the pieces, Shay steals the manuscript that can help them find the others, and plans on jumping off a cliff with it. He’s shot as he does, and he is assumed to be dead since he fell into freezing water and the body was never found.

Instead Shay wakes up in New York City and starts trying to deal with his guilt by helping the people there. He allies himself with the British, which just generally made me go eeeeeek since AC: 3 is pretty soon after this. You know what that means? Haytham Kenway shows up! So Shay starts working with the Templars although he’s not fully aware that he is at first. He is mentored by George Monro and befriended by Christopher Gist, who becomes his first mate on his ship the Morrigan. Shay is given the manuscript by Monro, as he finally trusts the young man, and admits they always knew who he was. Instead of being betrayed, Shay accepts his new purpose and joins the Templars after Monro is killed. He assassinates each of his former friends, and while he feels bad about it, sort of, I’m still like save me your crocodile tears, Shay. I’m not going to feel bad for you when you’re killing your friends! Eesh. He eventually tracks down Achilles and his best friend Liam once they have the manuscript and tries to stop them from using the pieces again. This leads to another dramatic earthquake where he flees, kills Liam, and goes on a big quest for the Templars. He is supposed to find the Precursor artifact, which is in the hands of Charles Dorian, the father of Unity protagonist Arno Dorian. It all comes full circle! He kills the man and that’s the end of the game.

Oh also there’s the real world stuff and eyeroll, honestly. At least we don’t have to spend as much time there anymore. You’re Shay’s bloodline obviously that they accidentally stumble on, and apparently the modern Templars weren’t even fully aware of the extent of what he did. You help them get all the knowledge he possessed, and they offer you to join the Templars or die. Who knows what happened from there.

This game was a bittersweet experience story wise, because I found myself liking the Templar characters while also being upset I had to kill the assassins too. There’s also a scene where Haytham and Adéwalé shout at each other about Edward Kenway and I was like noooooo whyyyyyy feelings. The gameplay was your typical fare. I was much better at the pirate part by this point. I do generally get frustrated how many things require constant pirating though. I had so much money, and I wish I could have just traded my money for upgrading places like in other AC games. It was a pain to go looking for supplies instead. It obviously was relying a lot on the pirate feature since most of the energy was put toward the naval fleet and upgrading the ship. I was fine with all of it, but I’ll be honest the pirate part is still not really of interest to me, outside of tolerable, so I got weary of it fairly fast.

Shay was a great character. I liked how we saw him grow up, and also it made a lot of sense why he made the choices he did. I very much believed his reasons for switching sides, and he had a point. It was cool to see the assassins from the point of view of ‘hey you are not perfect and sometimes just following orders isn’t the right move.’ I’ll admit it was a lot of fun to see more of Haytham in this game too! It was severely lacking in female characters though. We only had Hope and obviously you murder her, so. It’s hardly a surprise since so frequently the games are mostly dudes with some love interests, and it made me miss Syndicate and Origins. I completely bought Shay as a character and his growth in the story. I was fond of his friends too, and I was really into the story. I honestly can’t think of any other complaints. I’m so glad they put this out! I really hope some day I get AC 3 and Liberation remastered, because I would love to revisit them. I’m one of the few people who genuinely likes AC3, so sue me, and I also think it would be fun to do that story again now with more knowledge about the background of this game.

Maybe I just want an entire collection of AC that I can play at a moment’s notice. All of Kingdom Hearts did that, c’mon  Ubisoft, I think more people would buy that than you expect! I would love to play AC1 again too. I’m just saying. And now I don’t know how long I have to wait before the next Assassin’s Creed game is out. Noooooo.