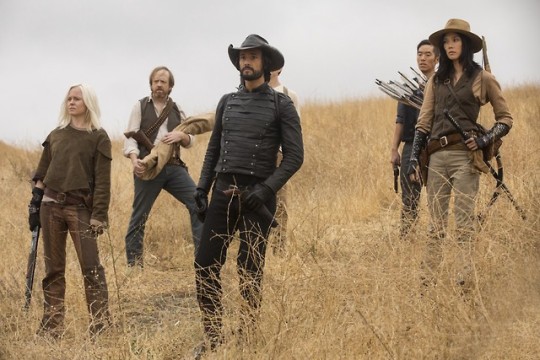 Evan Rachel Wood said on twitter that everyone better be prepared because the second half of the season is bonkers apparently.  Which is what I’d expect, since we’re all slowly moving toward the climax of what they want here. I know some people have felt this season is slower than they’d like, but I don’t feel that way, I think it’s been a good mix of action, mythology, and strengthening character journeys. I do think it seems like we’re moving at a faster pace from here though. Previously on Westworld, Maeve and co. went into Shogun world and she fell for her Shogun double Akane. Or rather was just happy to have someone on her level for once. Maeve also figured out she could control people with her mind. Dolores decided Teddy was sweet but too much of a wuss for her plan so she had them warp his personality matrix. I’m still angry about this. Bernard and Elsie are trying to figure out what’s going on with the park, and he flashed back to know that he saved some brain programming which is no doubt Ford. William reunited with his daughter Grace who was the woman hanging out in Eastworld at the start.

Let’s wrap up Shogun quickly. Akane cuts out the heart of her daughter so she can bury it properly at the place she came from. Musashi has a last fight with that dude he had a rivalry with so they could go safely. After burning the heart, Akane and Musashi say they are not continuing on with the party and staying at that peaceful place. For now. They are aware that eventually war might come to them, but they are willing to choose that as their last stand. It is key to see the way Maeve acts in this episode toward them: she is capable of controlling everyone around them and them too, but she says very clearly she wants people to choose their own fate. It’s a huge difference between her and Dolores and a continuation of how the two leaders of the rebellion are going in different directions. I feel like eventually Dolores and Maeve will actually end up on opposite sides, but I’m not sure when or why. Dolores is very clearly NO HUMANS ALLOWED and Maeve is willing to work with them. She also wouldn’t let her bae Felix die in front of her. At least I hope not. They still haven’t gotten a bonding scene yet and it makes me sad.

So let’s wrap up the Maeve half of the episode. We all know how Westworld works, so it’s not going to be a happy ending. Is it worse that her daughter is alive but doesn’t know her? I’m surprised she didn’t think about this, because of course they’re not going to just leave the child out there on her own! Would she prefer that? Who knows how many years it’s been since she shifted over. But it does mean that Maeve might not get her happy reunion right away, and if the Akane foreshadowing continues, I think a metaphoric death is coming. The girl might survive, but Maeve might allow her to either stay in the park or go somewhere safely never knowing her as an act of love. I wonder if she’s able to reprogram her daughter using her powers? The Ghost Nation people show up and Maeve remembers them slaughtering her. It’s interesting because I wonder if there’s a back story for that, since Ghost Nation seems to be an independent group now. I wonder if they’re working for Ford or someone else in there. They definitely don’t seem like the enemy and like they have their own plans, and they tell Maeve they’re on the same side. Meanwhile Lee uses their distraction to call for back up. Felix of course is pissed off, as he loves Maeve and I NEED THEM TO HUG OR SOMETHING OKAY, but that’s going to go no where good.

So let’s hop over to Dolores, who seems to be regretting or at least bittersweet about the new Teddy. I looked a little closely at what they did to him last week, and that was up his aggression, cruelty, and decisiveness. His loyalty is still at the highest though, Dolores isn’t that stupid. But this Teddy kills without hesitation, shows none of his warmth, and knows that Dolores changed him. It’s a credit to Marsden here, because he’s always been underused and the change in Teddy is impressive. He even looks different, somehow, like his coldness and anger have hardened all of his features. I knew Dolores would regret it, and this is only the start, I do think that eventually he’ll turn on her. She did have his loyalty high, but what if the other things she added to him could override that? I definitely think what she did to him will lead to a downfall of some kind, although we know he ends up drowned with the other hosts eventually. They put the engineer she had change Teddy on the train and then used it to blow up the exit/entrance. It’s a smart way to keep the potential armies from coming in, although we do know that Dolores wants to eventually go out. This happens after the security team we see in the future timeline get in, however, and they are with Charlotte and Dolores’ father now. But it means they can’t get Abernathy out. Muahahah.

There’s some stuff about Charlotte and the new security coming in and being a jerk to Ashley Stubbs, but honestly I don’t really care about any of that stuff, so okay whatevs. Ashley seems to wince and feel sorry for Abernathy, and he’s always seemed to have empathy for the hosts, but I’m not sure if that means I care about him or his eventual fate. 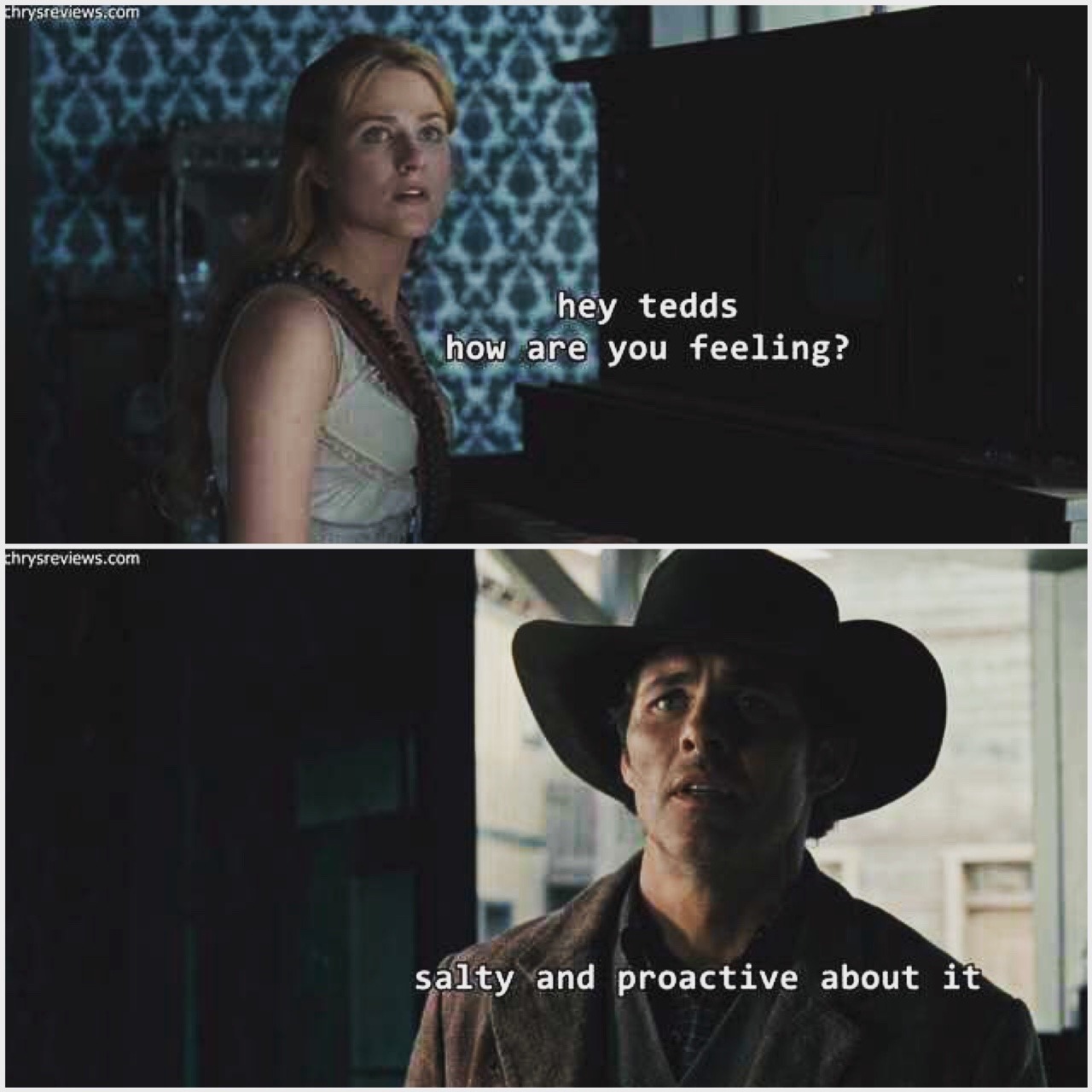 So William and his daughter have a scene and we get a little more of their interaction. They definitely are strained.  And Grace definitely has some secrets and motivations of her own that I can’t pinpoint yet. I know people have speculated that William might be a host or that Grace might be. She said something about how her mother killed herself when she saw him as he is, but I do think that could just as easily be that he’s a freaking psychopath. Grace was searching for something in Eastworld, and she tried to convince William to leave the park. I think she has her own plans and she wanted them out of the way, but he’s William so he snuck away while she was sleeping. We all knew he wasn’t just going to go with her. Is she working with Charlotte to undermine the thing that her family created? Possibly!

I’ll admit the Bernard parts can be the most confusing. So he and Elsie figure out the Cradle, where all the host’s memories and identities are stored, is being controlled independently. Ghost in the system! We remember again that Bernard saved some memory ball/chip, and he convinces Elsie to hook him into the Cradle even at the risk of a whole lot of pain and his own failing mind. He ends up wandering through the park, which I think metaphorically is him seeing all the hosts in the Cradle, and who is waiting there but Dr. Ford! It isn’t a surprise, but it’s still great to see. Westworld’s “twists” aren’t always unexpected, they give you a lot of information to get there, but it doesn’t stop them from being delightful. I know I’ve said for awhile that Ford is alive in the system, and this is proof. He added himself to the Cradle apparently, and that would explain how he’s been controlling some things going on. And trolling William. What his motivations and intentions are, we’re still going to get to. I talked with a friend about how much of things he’s in control of, and I think his intention was genuine to let the hosts have control over their own minds. I don’t think he’s been controlling them all this time, but rather doing his own things to the park. Possibly he’s in charge of Ghost Nation? It would explain why they have their own missions and ways of approaching things. It’s hard to say but we’ll get an answer to that next week … or over the next few episodes … or never. I didn’t know if Anthony Hopkins would be back at all this season and I am delighted he will be. Yay!