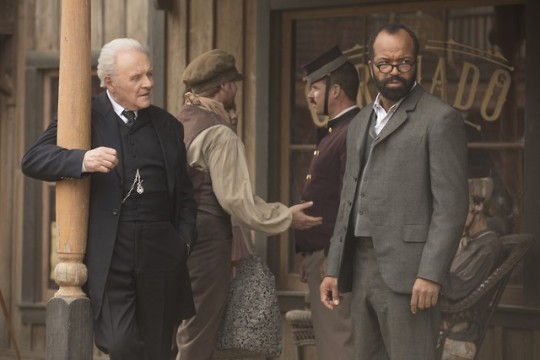 WOW. Evan Rachel Wood said on twitter that things were really going to amp up, and I noted last week that she was right. But this one went even faster than before. I gasped out loud several times in this episode. They confirmed a lot of speculation, and honestly what I love about Westworld is that they want you to figure things out. They don’t want constantly yell WHAT A TWIST; if you’re shocked, cool, if you figured it out, good for you. It all makes sense and fits within the world. And even if you’ve figured something out, you have no idea where it will actually go from there. So kudos to them for always trusting their audience to be smart and keep up. Previously on Westworld, Bernard had Elsie plug him into the Cradle where all the data/host information was kept because there’s a ghost in the machine, and he found Ford there, which we all suspected. Dolores turned Teddy into a sociopath and they blew up the tunnel to the outside. She wants to find her father who has a lot of information in his head that Charlotte stored so she could sneak him out. There’s no sneaking now. Maeve finally found her daughter but she doesn’t remember her. Also the Ghost Nation shows up and they’re around. We still don’t know what’s going on with them.

The cold open of this is when the group finds all the Bernards hidden away, which means Charlotte and co now know that Bernard is a host. The I was like oh nooooo my poor sweet Bernard. Charlotte questions him to see if he can tell her what’s going on with Dolores and her plan. That’s in the “future,” so we go back to the “past” where they left him off last episode. He and Teddy were both not made for this darkness, something Ford points out before he pulls a Dolores on Bernard. Ford explains what I speculated about: he is the memory chip that Bernard saved and put into the Cradle so he lives after death, in a way, and that the guests were all being spied on and copied so they could replace them. Or rather for immortality, it’s a little bit of both. He is only able to not start messing up like Delos because he put himself in the system rather than tried to copy his body and brain. He says that the hosts ARE awake; he didn’t program Dolores to kill him, although he suspected she would. Also in the past, the conversations with Bernard and Dolores were Ford trying to create him after Arnold died to get him as close as possible without setting off the Delos problem. Ford refuses to tell Bernard where this is all headed, although he clearly has plans for what he wants the hosts to do. But he also says that Bernard is too good for this world and flat out possesses him. POSSESSES HIM. At least in the past, we see that Ford is controlling Bernard and sort of living in him at the same time, and this is when he’s still with Elsie, who he sends off to do something to get her out of the way. He makes Bernard kill some people, or rather, he possesses him and does it instead. He believes in free will the way Dolores does … as long as it doesn’t get in the way of his plan. 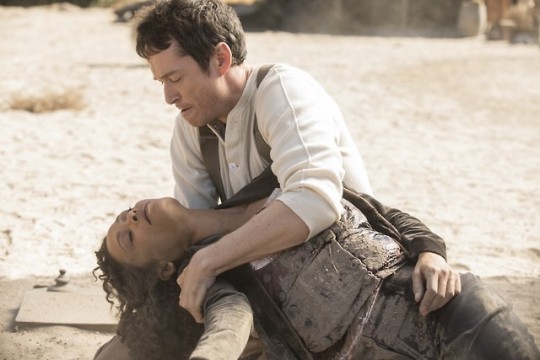 Quick move over to Maeve and her story. She hides with her daughter in the house they used to own, and she’s horrified to see William show up and come in. Remember, William claimed that murdering Maeve and her daughter was the first really awful thing he did in the park that was to prove to himself he wouldn’t care if he did something terrible. She remembers that. He thinks she’s a trick from Ford at first, and she proves him very wrong by shooting him. She then uses her powers to turn his former friends against him, and he gets shot MULTIPLE TIMES. I was screaming this whole time. I was so hoping this was the end of him, although maybe not quite yet, but yes. Shoot him a lot, everyone. She reminds Lawrence that he’s awake and if he tries he can remember the past. The chickens have come home to roost, because Lawrence remembers what season one William did to him and his family, including murdering his wife. He shoots him right in the chest, and I did think for a minute Willam was dead. Sigh. Some day. I think they’re holding onto so Dolores can end it. Lawrence gets killed by Delos, who Lee called last week. They shoot Maeve as well, but Lee tells them not to kill her, and instead sweeps her up to take her in. It may very well be sentiment, although I think it’s a mix of that and his genuine desire to understand how she’s been able to do what she does. I don’t know where Hector and the others were here, so I’m sure they might come to save Maeve eventually … maybe. Her daughter was taken by Ghost Nation, who I still believe has their own agenda so she’ll probably be just fine. 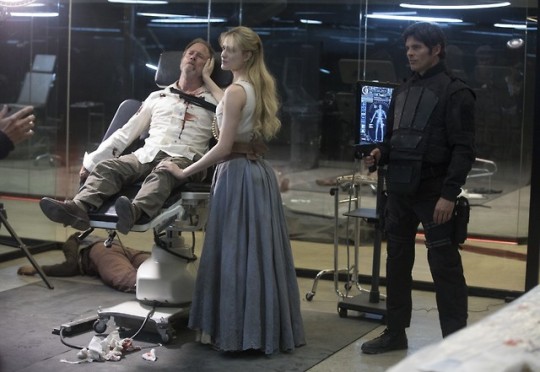 As Charlotte is trying to take Abernathy’s information out, Dolores and co. infiltrate them. Angela gets to the Cradle and sacrifices herself to destroy it.  Ford appears to still be in Bernard in the future, they mention how complex his brain and wiring seems to be now, but otherwise he’s gone because the Cradle is apparently gone. Dolores gets to her father and threatens Charlotte. I was really into this scene. Evan Rachel Wood recently called people out on being so hard on Dolores. People cheer on William or even Teddy recently for being cold and badass, but are vicious to Dolores. I do think there’s sexism involved in that, but I also don’t think it’s sexism to point out that Dolores is going on a very dark path. I’m not sure I’d call her a villain exactly, since I understand everything she is doing and why, but she’s certainly leaning on her darkest and cruelest impulses and going to extremism. Maybe anti-hero? I can’t say that I don’t root for her. Whenever she one ups the people who used to victimize her, I grin. So I’m still with her, even if I’m sorry to see her lose a piece of her good soul with every act. In this case, she chooses to remove the information from her father, even though it will destroy him. He does seem to understand this however and to give her the blessing to do so. She is genuinely pained by this, but at least she didn’t do it against his will. It’s still a measure of how far she’s been willing to do, to destroy him and alter Teddy.

Briefly she comes across Maeve there who is injured. Lee has hidden, as everyone else is gunned down, and she offers Maeve a swift death by her hand. Maeve instead says that she made a promise, to her daughter, and she wants to stay alive. Dolores sort of criticizes her devotion to her daughter, as it’s a programming, but I think she’s wrong about that. Yes, Maeve’s initial feelings about the girl was programming, but she’s self-aware now. She could’ve ignored that part of her memories. This is her choice, to love another host even if it was initially false. It’s interesting that Dolores respects her choice to live, even though we’ve seen her remove the choice from Teddy. Maeve even points that out. I think she knows Dolores did it because she knows Teddy isn’t that cruel, and also she probably can sense his programming change. Again I very much believe these two women are cornerstones in the storytelling of Westworld and how their different pathways are all about free will and how you can respond to the tragedies in your backstory.

So we had several theories confirmed! Ford was alive in the programming of the Cradle. Westworld was created to observe and copy human minds, trying to create immortality, although also I think to replace them. Ford says that they didn’t want the hosts to be more like human, they think humans wanted to be like hosts some day. Makes sense. Charlotte and co. in the future know that Bernard is a host and they’re hoping to get to the bottom of where Dolores took Abernathy’s info, so we know Dolores still has the information from his head and that they don’t know where she is. We still don’t know how the flooding happened or how everyone died, including Teddy. That’s obviously coming. Bernard seemed to believe he was responsible. I can’t really see Ford killing them? He didn’t want that, he wants to support the hosts. The two timelines are almost at the same point, as Bernard washed up on shore, so we’re almost there. What will happen with Maeve? Will Ghost Nation save William? What’s their deal? Are Angela, Clementine, and Lawrence dead for good? Probably. Next episode is entirely about the Ghost Nation apparently and I AM VERY EXCITED.