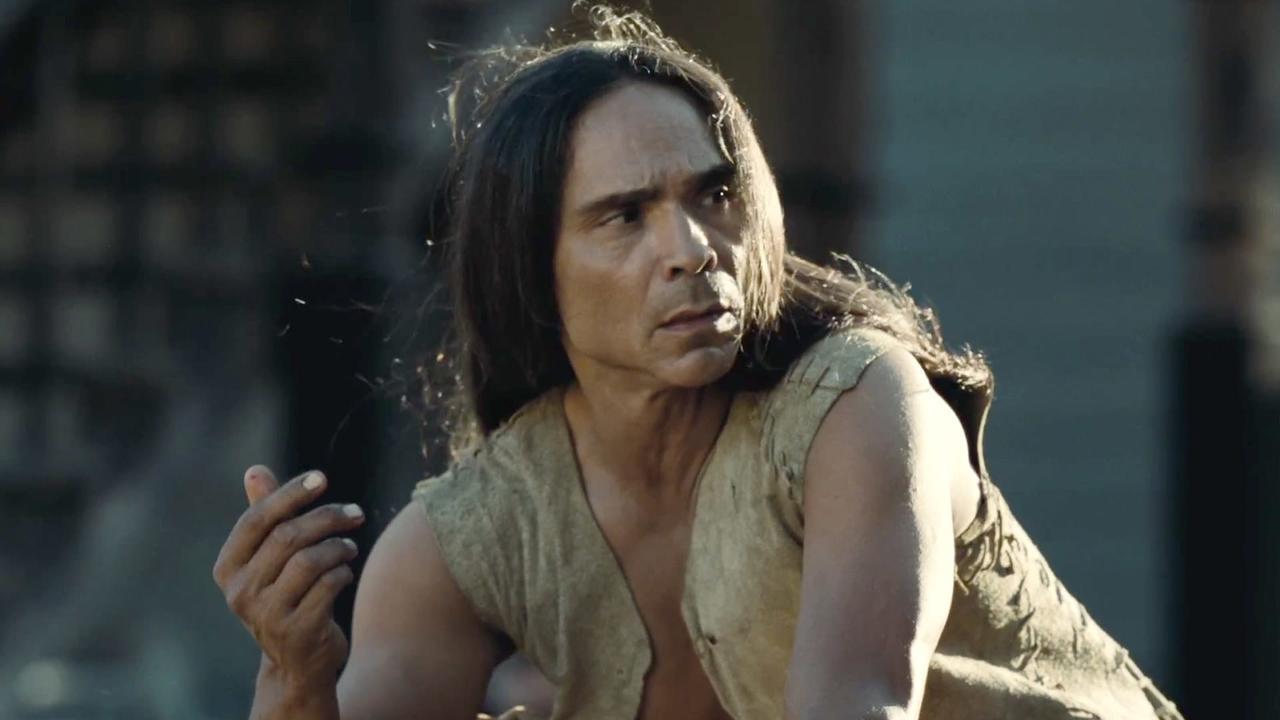 Wow. First off, it is pretty daring/risky to take an entire episode for a side journey with a side character. Especially when there are only two episodes left of the season. Second off, this entire episode rides on the shoulders of Zahn McClarnon who has always done a good job in the background but never had a starring moment in the show like here. Third off, it’s 85% in the Lakota language so they needed to have faith the audience would be fine with subtitles that long. So there were a lot of ways this episode could have gone horribly wrong. It’s a credit to their trust in the writers and Zahn that they went for it, and in my opinion, it was a successful risk. I’ve been desperate for a Ghost Nation spotlight since this season began and it was clear they had their own motivations going on. And we got it! This really dives into the mythos of the show and general themes, so. Previously on Westworld, Maeve found her daughter only to get shot and her daughter whisked away by the Ghost Nation. William has been shot multiple times and that SOB just won’t seem to die. Once upon a time he sent Logan naked on a horse out into the desert and we see Logan later barely holding on mentally.

I actually want to start with Maeve and get that out of the way since she’s only a small part of this episode. Lee brought her in and convinced them to save her, because of her unique powers. Charlotte is definitely intrigued and they hook her up to machines and it’s pretty horrific how she appears cut open and hooked to tubes. Lee’s officially infatuated with her, although like Felix I don’t think it’s sexual, she just brings love out in others. They believe Maeve can help them get back into the computers, but then realize she’s already been in the network this whole time. Why? So she can see through her daughter’s eyes to make sure she’s okay, and it’s doing this that gives her the chance to face Akecheta, the Ghost Nation leader that in the past she’s been terrified of. He tells her his story, although through most of this episode we think he’s talking to the daughter, but by the end we see he knows Maeve is in there. They will be allies going forward!

Okay so to the main story! We meet Akecheta and he seems very content with the peaceful life given to him. He is happily in love with Kohana, played by Julia Jones, who is also fantastic in this. Akecheta’s life changes when he comes upon the scene where Dolores killed Arnold and everyone else under the Wyatt program. He finds the map-puzzle that is supposed to help wake up the hosts. It torments him as his mind starts to unravel. He is then given a new personality that is more vicious and violent, in order to make the guests happier about murdering him obviously.  Yuck. His love is taken from him, and he doesn’t realize something is off until he sees her again and starts to remember. He also travels deep into the park and sees Logan there. He gives him a blanket and assures him someone will come for him. Logan’s burned all over and dying of thirst and sun mad. Listen Logan’s not a great person, but William flat out could have murdered him here. We know he’s a psychopath so this is not new. People asked why they didn’t go get Logan sooner, and my guess is because they didn’t know where he was. William could have easily lied in order to make him suffer longer  or give him the chance to take over the company more with his new evil plans. Akecheta is troubled by Logan’s mumbling about how the world is wrong and isn’t real.

Akecheta takes Kohana and manages to wake her up enough to remember him. Their happiness is short lived as the group finds her and takes her away. He intentionally gets killed so he can go to the “underworld” and find her. This is very Orpheus. The engineers are surprised to find out he’s a decade old in the park and has not been updated because he’s never died so far. Nice. They update him and walk away, confident their hosts are in control. Instead he gets up and Nirvana’s Heart-Shaped Box plays in the back, a beautiful music arrangement of it. He sees all of the behind the scenes, horrified, and finds Kohana as a lifeless doll. Instead of dwelling in his pain, he realizes that everyone now a blank doll had a loved one, and he resolves to go back and start waking everyone up to what’s wrong in their life. He wants to get to The Door (the title of this season), where he says they’ll find the true world. Ford confronts him to figure out how he’s doing all of this. I knew that Ford wouldn’t miss something so out of place. I thought he was the one controlling them, but no, they’ve been controlling themselves, and he encourages that. He tells Akecheta to be ready for when the Deathbringer comes for him and to wake up the others. He tells Maeve through her daughter that they need to band together to stop Dolores before she destroys everyone.

Oh also William’s daughter shows up to get him back, and for some reason they all allow her to do that. SOMEONE KILL HIM ALREADY PLEASE. It looks like next week is a William centric episode which made me sigh loudly, but maybe it’s because he’ll finally die.

Wow that episode. Zahn is extraordinary, they better keep in mind for an Emmy nom for that appearance, he deserves it. I want to make a special notice of that moment when he meets Ford and Ford goes through his programming to get an answer. The horror on Akecheta’s face when he realizes he can’t control himself is so palatable. I love that he’s rewritten his primary objective to make everyone his tribe and to protect them. The acting is superb, as I mentioned. The visual design of this episode is also noteworthy. This show has always looked incredible, but it really upped its game here. It’s been clear that Dolores is on her dark phoenix path and I’m sorry that she’ll come into conflict with Maeve and Akecheta soon. Although I think that if she was willing to work with them and not be so destructive, they could all team up to get out of the park. Evan Rachel Wood was mad that people were so hard on Dolores while loving William; that’s a double edged sword. Male anti-heroes are excused, female anti-heroes are criticized. But she is that right now, in a very believable way. There are different reactions to deep trauma and Dolores has gone with straight up revenge. I understand that. I will be sad if this means she will destroy our other leads to do it. It does appear to be coming to a head soon, with the factions clashing, and maybe that explains how the whole area got flooded. I LOVE THIS SHOW.