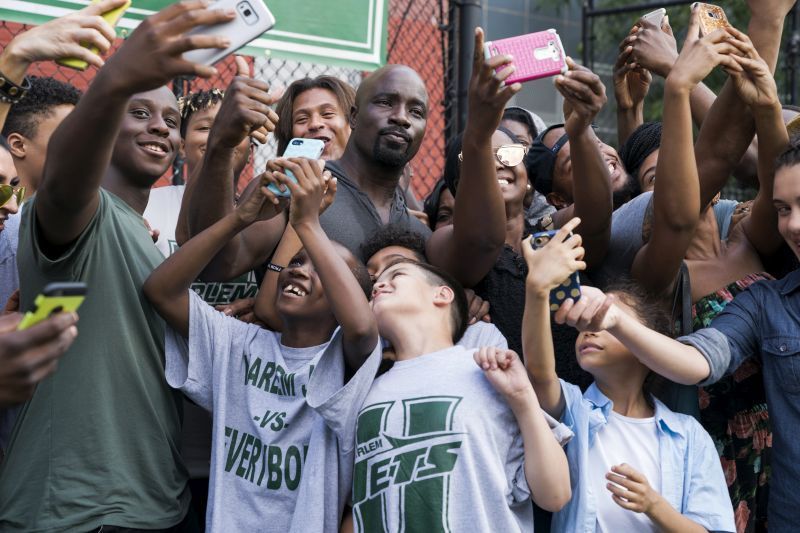 First off: Lucy Liu directed this episode! I was delighted when I saw that. There are actually several female directors this season and I am very pleased to see that. Netflix has been making an effort to diversify, especially with their Marvel recently, so thumbs up. One thing I find interesting about Luke Cage is that the showrunner listened to criticisms of last season, and he acknowledged them and wanted to do better this time. The active one was that the first part of season one was excellent, but once Cottonmouth was dead and Mariah was in the back seat, it was less interesting. So let’s see if he did learn his lesson. Previously in the Luke Cage world, he is now public as Harlem’s Hero. He is a bulletproof superhero who doesn’t wear a mask and is inspiring change in his neighborhood. He’s dating Claire Temple, the awesome Night Nurse. The last time we saw him was in Defenders when he united with the other heroes and he’s gotten a lot of confidence now in his role. But he’s also a big target! Misty Knight also recently lost her arm saving Claire and Colleen in Defenders. 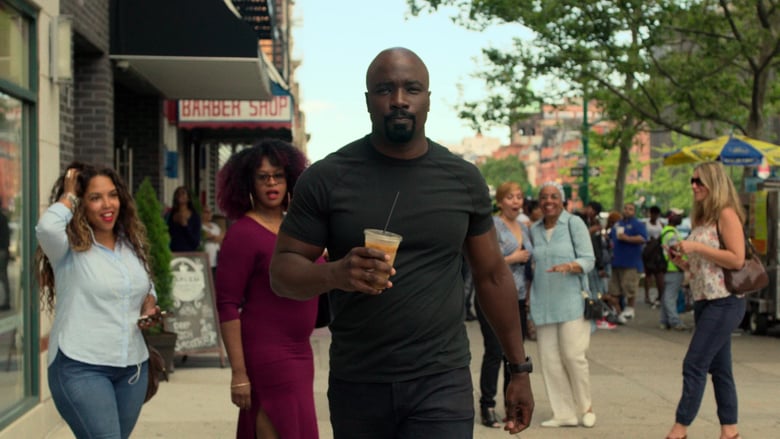 Luke is a public celebrity and he seems to really enjoy that, although I don’t think he wants to openly discuss how much he likes it, because that would seem egotistical. Pop’s is struggling financially and a lot of people are reaching out trying to sponsor Luke and give him money, but he doesn’t feel comfortable taking it just for helping out his neighborhood. Claire patiently points out that cops and firemen and all that get paid for trying to save the people too, and everyone needs to make a living. There is already friction between them, so it’s possible they  might not make it that long, as they’re both very independent people. There is also an app now for Luke, and people try to get pictures with him and track him around the city. Meanwhile Misty is trying to adjust to life without her arm, and Claire is helping her work on her reflexes. While Misty pushes against the idea that she might be pitied, Claire points out she’s just grateful; Misty saved her life. She’ll do what she can to help her. I am so here for lady friendship so huzzah. Misty chose to walk away from police life for now, but then she realizes her corrupt police partner let out 30 criminals she put in jail. So she can’t walk away cleanly, unfortunately. Is she going to get her robotic arm this season? That would be cool, but they don’t really have a gadget person on the show currently to do it. 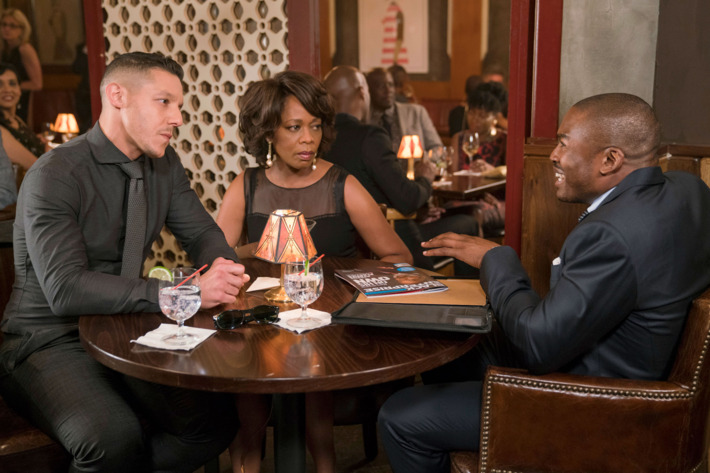 Meanwhile Mariah and Shades have become a real romantic item and they’re still deep into the criminal world. Mariah implies that she actually wants out of it, but she probably won’t be. This dude nicknamed Cockroach wants to buy her out of the criminal empire. Okay so there are several bad guys/drug dealers introduced here and I have a hard time keeping them straight.  Cockroach is Dontrell Hamilton who wants to be the new boss of criminal enterprises. He is working wth drug smuggler El Rey and another gang leader Garrison. El Rey is behind a new drug on the streets they named Luke Cage, which Luke is pretty angry about, and he’s caught by the cops. The cops are not particularly happy about Luke being considered a hero and doing the cop work when he’s a vigilante in their eyes. But good luck taking him in, cops, and we know they’re a pretty corrupt group so yeah, not so much trust there. Meanwhile Garrison is killed by a new player John “Bushmaster” McIver who appears to have super powers as well, very similar to Luke’s bulletproof self. Mariah threatens Claire when Luke shows up at her place, and Claire’s very ‘listen you don’t control me’ at him and he says he can’t lose her. Obviously Luke doesn’t want to lose someone he loves, and there is some PTSD involved since his wife was murdered. But Claire’s journey in the series so far is that she doesn’t plan on staying on the sidelines forever. I do appreciate that if they plan on making Claire and Luke have a rocky relationship, it’ll make sense for their characters. We also meet his preacher father who is a real jerk. We already knew that he kind of was, considering his bad relationship with Luke and Luke’s evil half-brother Diamondback. I’m not sure what role he’ll play, but they did a good job of me disliking the dude right away.

Okay so obviously this first episode was to set things up and get us ready for season two. It’s not supposed to wow us or anything. I do find the general set up interesting, although I am concerned that having a bad guy who is similar to Luke and his power set is too much like last season. I do get it’s a common staple in comics though; they need to be a match for the hero. I think my biggest problem with the first episode was how many players were involved. Like I said above, there were moments when it was hard to keep all the new bad guys in line, I know Mariah and Shades but still adjusting to the others. I found myself getting distracted from this episode because it dipped in interest a few times, and that’s pretty normal of premieres. I am very excited to see Misty and her journey so far, and in general I absolutely adore the evil Mariah and hope she keeps being a dark horse player in the game. The episode didn’t get me very hyped, but I think it was a strong reminder of where we’re at and it blended in easily the Defenders storyline with what was happening here, without getting into heavy exposition. I’m not sure where the timeline is here with Jessica Jones, both take place shortly after Defenders so possibly around the same time. I’m very into having at least one of the Netflix heroes who is in fact openly a hero. I often get frustrated by masks and secret identities, so I dig that Luke is like naw this is who I am, deal with it. And that will give him his own share of issues too. I’m looking forward to continuing!