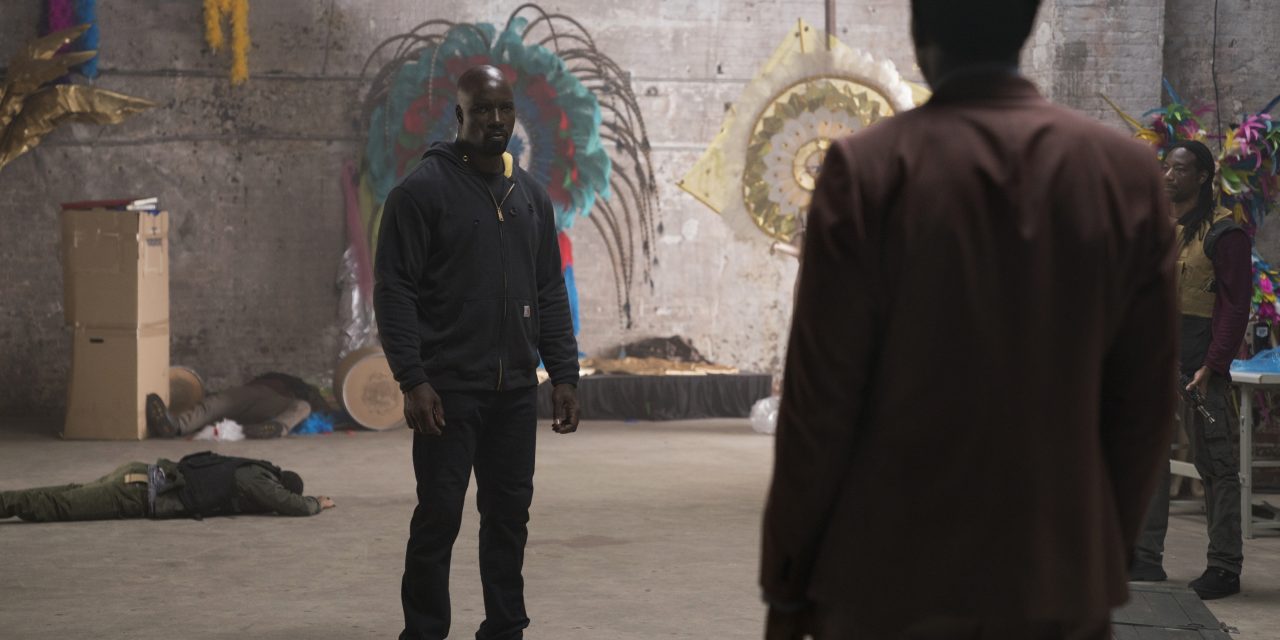 Wow. A lot to unpack here. I was right they are headed toward Luke leaning into his dark side as a character growth intention, and I don’t know where I’m at with it. Currently I am disappointed and not particularly fond of him. I still think the character is great and I want him to succeed and do well, don’t think otherwise, but I feel like the sophomore seasons of every Netflix hero so far has been like ‘we need them to be awful for a little while.’ The danger of course being that you take them so dark people are tired of them. I’m definitely not giving up on Luke, though. His path has been different from the others because of how public he is, and in a much harder way than say Tony Stark for instance. But I am still a little wary of him right now and where he’s headed. Anyway. Previously on Luke Cage, Mariah is trying to get out of the crime business and start her career over, persuading her daughter Tilda to reconcile, while doing that really as a manipulation tactic. Bushmaster is the villain who has some super powers of his own, but we haven’t seem them really thrown out there (yet). Luke’s father is in town and they have a bad relationship. Claire is not really liking Luke’s descent into darker decisions. Misty’s readjusting to being a cop but not having an easy time without her arm.

So this episode starts out with Luke having beaten the hell out of Cockroach, to the part where he could have easily killed him. He did walk in on the man beating his girlfriend up, so he had a bit of a fury trigger on that, but Claire is called in and concerned. We learn later (although it’s been implied before) that Claire is from a domestic violence household herself. That factors in later. She calls Misty and she lets Luke go, although she’s frustrated with his brutality when they all know he could’ve just easily knocked the man out with a single hit. To be fair, we know very well that Matt for example has been very brutal on people, I think the contrast is Luke on the whole does try to just knock people down and keep it at that. This was a little more intense than usual. Luke later fights a bunch of people while Bushmaster films it so he can learn Luke’s moves for a better fight later on. You know, Luke has some decent moves for someone who really just has to smack people around. He’s a good brawler. I wonder sometimes if it would be cool if he’d learn some martial arts too, but he and Jessica seem pretty content with their usual superpowered smacking people around. We see Bushmaster breathing in what’s probably his superpowered stuff and train against what he saw from Luke. He talks earlier about how he wants Harlem, and Luke challenges him on that, basically being like dude stay outta my area, that’s all I’m saying. But in general power player ways, Bushmaster wants it all. 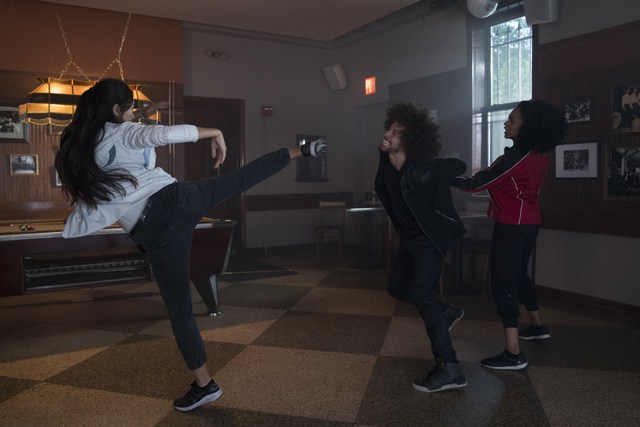 Misty gets reprimanded for letting Luke go, but they can’t really do anything to her currently because she’s a bit of a hero and newly disabled. Yikes, that isn’t great to hear. Colleen Wing guest stars (YAY) to spar with Misty and talk to her about finding her chi and inner peace. And also enjoy a bar brawl with her. I love the reminders of the Defenders just in terms of how the women really bonded, and please give me a Colleen/Misty/Claire show stat. I need it. They all deserve better than being supporting characters. Misty is getting her groove back. Also Mariah is delighted when Bushmaster’s group officially buys her out, and that means she can just focus on her work, which she does. Tilda talks to her a bit about how shady their family was growing up. I’m still watching you, Tilda. You seem nice now, but you’re a part of that family, just saying. Luke does go up against Bushmaster for the first time at the very end of this episode, and boy does that look like one helluva match. Claire goes and talks to Luke’s father, not naming names, but she’s searching for some guidance about what to do with him.

This all comes to a head when she confronts Luke about everything. I really, really, really don’t like the way he’s talked to her lately. I don’t like how he pulls the overprotective stuff in episode one. I don’t like how he implies that her criticism or speaking her mind is unsupportive and scorns it. He does that here too, when she expresses genuine concern about the path he’s going on and how anger is a crutch. He does make an argument for how he’s fighting fire with fire, and that sometimes it’s how it gets done. And how as a black man he has limited choices in who he can be. Although he did in the past prove he could be himself without really needing to go extreme in either way, but things have changed around him. Claire reminds him she’s a WOC and there was racism toward her mixed race within her own home. When she talks about his father, Luke loses his temper and slams his fist against the wall, breaking a part of it. He seems to realize how bad that is, how far he’s gone, and maybe a little of what she’s saying about where he’s headed. He softens and reminds us of who he is under the anger, but it’s just too much for Claire. She grew up in a violent home and promised herself not to be in a situation like this herself. She also has struggled a lot with her place in all of these stories and she needs a break. I don’t think Luke gets yet that this is most definitely going to be a break up.

I will be sad to see Rosario go. I think she said she wasn’t so sure she’d show up against in any of the Netflix shows. At least there isn’t an indication she’s in Iron Fist 2, although she still has her ties to them. She’s changed a lot over her time in their world, but I do think she’s maintained that steady presence of a moral compass. She’s allowed compromise in how moral that compass is, and she obviously comes from a dark background herself, but I do appreciate how firm she tries to keep her boundaries. The problem is that likely with Claire gone Luke may very well go even darker than he is now, but she’s not obligated to stick around just to keep him afloat. I do tip my hat to the writers because this is a very believable storyline for both characters, and I like how realistic this conflict is. Also kudos to the actors, they killed that scene.

I still am somewhat seesawing on where I’m at this season. There are things I like. This does seem a natural progression of where Luke is headed, because he’s lacking the central point of view and how to keep who he was now that he’s so public. You know at his heart he means so well and he wants to help people, but right now it feels to him like his only way of doing that is through pain and violence. It’s a hard situation to be in and I get that, although I am a little tired (as mentioned) of people thinking dark sides are the only ways to explore protagonists. I don’t feel anything for Bushmaster yet, I still think he’s not really a stand out right now, but I think that could change. Mariah is still a really good character. She reminds me a little of Jeri from Jessica Jones, they’re not good people obviously, but I find them very intriguing. But my iffy feelings is why I’m watching this so slowly.