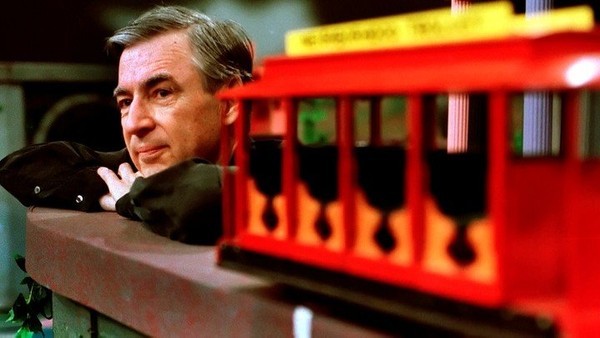 I’d say there are spoilers but this is a documentary so it’s real. Warning there are video clips of him being a wonderful person in this review and it might touch your heart.

Oh man can I write this? Will I be able to write this without tearing up? That is the task ahead of me. Breathe in, breathe out. I was a mess in the theater. Won’t You Be My Neighbor is a documentary about Fred Rogers and his show Mister Rogers’ Neighborhood. It reflects on the man himself and also on the importance of his show and how it was created. I do think there are aspects of this documentary that is worthwhile to people who never saw the show, because it is interesting how this very different show became so popular. At the time, children were seeing slapstick and cartoons began, and yet they still were enraptured by this otherwise simple production. The last episode of Mister Rogers was in 2001, so it is not nearly as far away from modern day as you might think. It was in syndication for years later. There were 912 episodes made plus many specials from the day it began nationally in 1968. I remember watching it as a child. I remember it so well that while the documentary played, I could hum and murmur the words to the songs without problem. I remember the characters and some of the lessons, although I’ve missed many episodes throughout the years before I was born. There was something about Fred Rogers. I was spellbound by his show even older than the years it was aimed for. It was comforting. He was comforting. It is probably why he was asked to do a message after 9/11. But I’m getting ahead of myself.

This documentary is done by Morgan Neville. It is a series of clips from the shows, from behind the scenes, from when Fred testified for PBS or his less openly televised moments. They took film from when he just chatted with children, from his home videos, and other moments. Interplayed with that were interviews with his family, the cast and crew from the show, and other people whose hearts were touched by him. It talks about how Fred got started in television. He was a minister, which I find fascinating because I never felt like his show tried to preach anything religion specific. I think I would have been uncomfortable with that even as a child. It seems that he was more trying to give the positive messages he knew from his religion and translate it to a broader audience so anyone could understand it, from any background. Messages like kindness, love, empathy, understanding, and a lot of other things. Fred was a lifelong Republican but he was also unafraid to push the establishment, openly making shows about war, pacifism, death, assassination, and interracial politics. Officer Clemmons, played by Francois Clemmons, was in a famous episode where the two of them casually bathed their feet together in a little pool. This was in response to racist acts where people were not allowing black people within public pools. Fred wasn’t having that. I’m sure he got some response from producers for even casting Clemmons as such an important and consistent role on the show, but Fred Rogers clearly did not care for studios trying to control him. This was his show and he would do what he wanted with it.

As mentioned before, the show was also used to discuss very serious issues for children like death, depression, and divorce. The sock puppet of Daniel often expressed feelings of sadness, anxiety, and low self esteem. Fred’s wife Joanne said that she felt Daniel was more of Fred than people realized, or mostly Fred when he was a child and struggled with his own issues of fears and anxieties. His parents apparently were very firm not to discuss certain things, which must have led him to bottle a lot up. By addressing these feelings more openly for children, in some ways it might have been cathartic for him, to make sure other children didn’t bottle up the way he had. I know that frequently for me, his open embrace of emotions and making certain children knew they were okay, was impactful. Fred’s open kindness and gentleness did lead to him being accused of being gay. What a shock (sarcasm). How could a man be so in touch with himself in his feelings unless that was the case! Clemmons however was gay, and he did share a little discussion with that. Fred is not treated like a complete saint, he had his moments of struggle. He warned Clemmons that he couldn’t openly be gay or go to gay clubs where people could see him, because their sponsors would not support it. I’m certain that hurt Clemmons, and everyone knows as a minister it probably troubled Fred to come to terms with his own bias. Apparently Clemmons said in time that changed and Fred was very clear that he loved his friend exactly who he was, and wouldn’t change a thing. This was a common theme of what he sang to the children, so clearly he realized showing that to his friends was important too. Clemmons teared up while talking about that. My heart. People also theorized he had tattoos and used to kill people in the army, both being lies, and I think it’s because people wanted to make him flawed. They couldn’t believe someone could be like him.

Fred’s famous PBS defense was something I’d seen before, but it was really fun to watch again. The man in charge had every intention of taking that funding away, but all it took was a gentle and sincere statement from the heart to break through to him. A grown adult, skeptical and certain, could bend to the will of Mister Rogers’ sincerity. Again, they were not entirely painting him as a perfect person. Fred struggled once he tried to leave the children and speak to adults instead. He was frustrated with the violence on television and didn’t like the mockery of his show in comedy routines like Eddie Murphy’s famous one. As he got older, it seems he definitely became a little grumpier. They said he started out as Daniel and sort of morphed into King Friday, so there is that. But he still was Fred Rogers to the end. One of the last things he did was that 9/11 message, because by that time so many people had grown up with him and he was a trustworthy voice. They said he did struggle with that tragedy, with the grief, with losing a little of the hope that lived so strongly within him. But he found it in him to try and reach out to everyone else. The documentary does address his loved ones at the end and ask how he would feel about modern day. I don’t think they were pointing fingers at a certain someone in power, my guess is more aimed at the every day violence and troubled times. They seemed to agree that he would struggle with it a great deal and have trouble keeping himself hopeful, but that he would try, especially for other people. Fred Rogers died in 2003 after battling stomach cancer. More than 2,700 people attended the memorial and many others were outside in solidarity.

Like I said, I do believe that this documentary would be interesting even to people who never watched his show. If you’re interested in television history, it seems like a singular creation that defies norms. If you’re interested in what the big deal is about, hopefully this will give you an idea of what. People used to think there was no possible way Fred Rogers could be who he presented as. They came up with all kinds of suspicions and rumors. They kept fearing something would come out about him being bad. It’s a sign of how cynical the world can be and how many people have let us down. But just this once, I think we truly can believe in a person. He wasn’t a perfect person, nor did he claim to be or believe he was. In fact he seemed to care a lot about how flaws in people could be strengths, and encouraging them to embrace those aspects. It actually led to some criticism. I was infuriated whenever I saw think pieces about how Fred actually ruined generations of children by telling them they were special. That they didn’t have to work to be great because they were already special. That seems like someone who missed the point. Or maybe they didn’t watch enough of him. Children have a lot of emotions and insecurities as they learn about the world and their place in it. It is very easy to damage a child’s self esteem and change them in negative ways. Reassuring them that it’s okay to be who they are is a good thing. Whatever. Also I didn’t know there were vicious protesters outside of his funeral because he supported gay rights. I would like to personally punch every one of them in the face … but Mister Rogers wouldn’t like that. *sigh*

This is a great documentary. It shows a lot of POVs. I loved the behind the scenes and the pranks the cast would play on him. I loved the deeper dive into how he did have a sad side underneath, but overcame it. It made him into more of a real person and not only an icon, which is what I think was necessary. While at the same time being like ‘yeah. He was a genuinely good person. For real. No joke.’ He says when things are bad always look for the helpers. It’s hard sometimes to remember how hard he believed in the good of humanity and feel the same way. But it’s important that someone believed that, and important that the message was imparted to ears that were listening. I think he touched a lot of hearts, mine included, because he meant what he said to his audience. The love and the kindness were real. What Would Fred Rogers Do? Probably sing a song. Hit it, Fred!