Okay I’m back! Getting through these slowly. I do like the show, but I’m not feeling the urge to binge. Previously on Luke Cage, Luke and Claire broke up, he’s gotten a huge chip on his shoulder thanks to all the attention of being a hero, he also thinks being violent is an answer (but to be fair sometimes it probably is), Mariah is trying to get out of the criminal business and start over, she roped her daughter Tilda back into her world, and there’s a new bad guy named Bushmaster who seems to have powers himself. The indication is through herbs and voodoo and it kind of makes sense. He’s also brilliant in a way because he filmed Luke fighting and learned his moves that way. He’s trying to take over the crime in Harlem. He also, I admit, has such a thick accent that I’ve had to put on captions. Colleen is struggling to get back in the groove and the loss of her arm.

Claire is gone now which breaks my heart, and it reminded me of how uncomfortable I was with their fight last episode. Luke also is uncomfortable when he visits her place later and sees the hole he made in the wall. Someone comes by to give him Claire’s last letter, although we don’t see it, and her judgment of his actions is plain. I think Luke feels bad, but also feels defensive. He doesn’t really seem to blame Claire though, which is good, because I would be realllly mad at him if he went that route. His ego takes a heavy beating because he also takes a beating. Bushmaster caught him right after the fight and knocks him out. People take footage of it and it gets spread everywhere, so his ego AND his reputation get tarnished. He’s no longer untouchable. He’s freaking out a little and decides to join up with Misty to investigate the Jamaicans more. Tilda sees Bushmaster fight and considers the ingredients she sold him before, and then Luke pops by and they have a moment and she gives him some help for his concussion. I’m still waiting for her heel turn because she’s a villain in the comics. 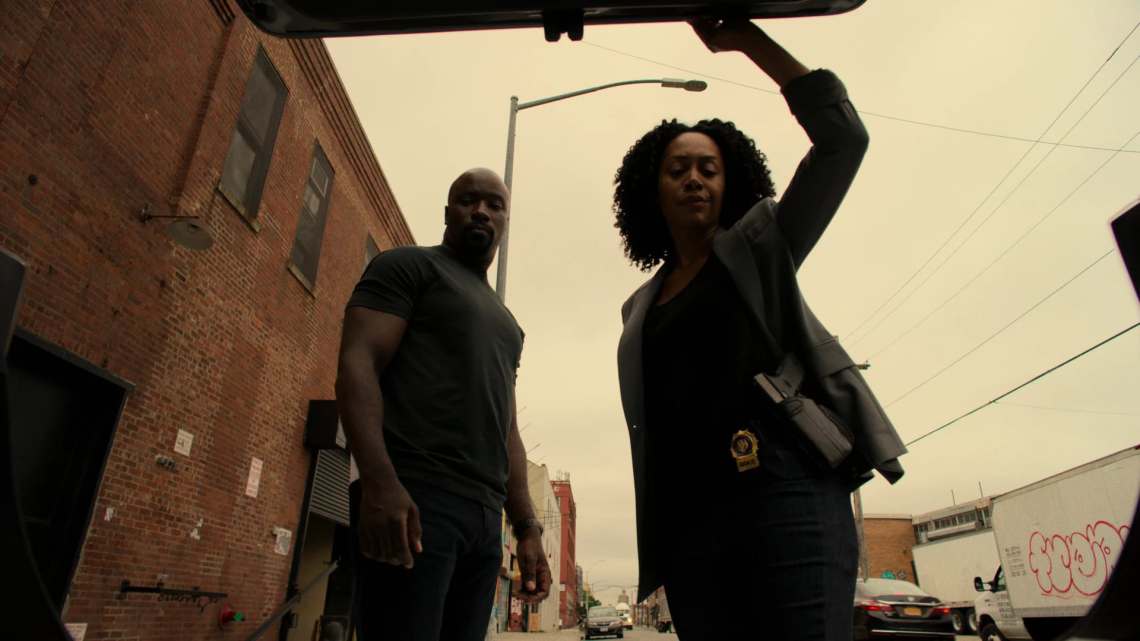 Bushmaster and Mariah have a bit of a showdown where he goes to her club and he is just generally threatening without actually threatening her. It’s all in the tension. There’s some hints that say Bushmaster has some justice seeking perceived wrongs toward his parents, but I have to admit I don’t actually care and didn’t really listen closely lol. He’s a good villain, just not really interesting me currently. Mariah is certainly stressed but she’s continuing with her plan. She is a badass bitch, but I can’t help really liking her and hoping that she gets out and runs off to a tropical island with Shades. I can’t believe I’m saying that, considering they’re evil, but whatever. Can’t help it. Run away, kids. Speaking of Shades his friend Darius is working for Misty’s captain Ridenhour. He probably made a deal so he could get out of the life too, but that’s not going to go over well. He keeps clashing with Mariah but she lets him stay due to Shades. Shades loves Mariah and keeps making rookie mistakes for her, which Darius doesn’t like, but this is a one way street to tragedy for both characters, who clearly share a deep bond. Again, they’re villains, I shouldn’t feel bad for them. In the end Luke’s friend Bobby has to leave the barber shop and him for his daughter, and Luke’s really all alone now. He’s served with a law suit. Sorry, Luke.

So yes I’m enjoying it overall, but I wouldn’t say I’m anxious to watch every episode. Bushmaster is fine but I’m kind of waiting for everything to start really happening. This is clearly set up, I see the chess pieces put into place, but where this is going I’m not sure. I have to say, I’m not really liking Luke right now. These Netflix shows have a way of trying to show their leads in bad lights occasionally, and I get that, but I think I said in Jessica Jones that I’m also kind of tired of it? I don’t really need to see good guys act like bad guys or have that dilemma. Sometimes good guys can just stay good guys. But he’s layered and nuanced and I understand, it is starting to get on my nerves that’s all. It says a lot when I’m more interested in Mariah than I am in him. Oh and Misty. I do love me some Misty.