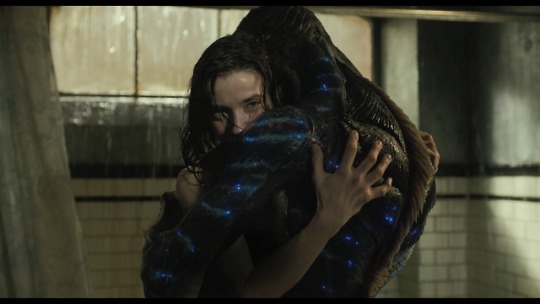 There are spoilers in this review. Duh.

It’s funny to be so behind on reviews that now this movie has won the Oscar for Best Movie and I can’t be all “I called this months ago” because I don’t have proof. And also because I didn’t call it. I never thought it would win, but of the nominated movies, it was my favorite. This whole thing is so fascinating because you would never have thought that a movie about falling in love with a fishman, with the leads all being minorities of some kind (black, gay, mute), would get the attention it did. Years ago it certainly would not have. Guillermo del Toro is a respected director, but always as that person people recognize as talented, but maybe not Oscar level talented. It was just the year for a horror-love story, I guess? It’s the first science fiction-esque (although maybe fantasy? It’s hard to say.) movie to win. And it deserved it.

The Shape of Water is about Elisa Esposito (played by the incredible Sally Hawkins), a woman who lost the power of speech to a childhood injury and works as a janitor at a secret government science lab. She is overlooked by everyone, but she leads a rather peaceful if mundane life. She is best friends with fellow janitor Zelda (Octavia Spencer) and her neighbor Giles (Richard Jenkins), a struggling gay illustrator. One day, they bring a top secret prisoner to the lab, what appears to be an animalistic fishman (Doug Jones) who is dangerous enough to bite fingers off and kill. Elisa however sees something gentle in him, and something vastly more intelligent than others realize. She teaches him sign language because she understands what it’s like to lack communication skills and for others to write her off because of it. This is while dodging the terrifying Colonel Strickland (Michael Shannon), who tortures the creature and creepily preys on Elisa. He visibly seems like the perfect man of the 1960s; handsome, powerful, egotistical, short sighted, and violent. When Elisa finds out they plan on killing the fishman and dissecting him, she begs her friends to help her save them, and they find an unexpected partner in a secret Russian spy/doctor who was part of the experiment. He figures saving this creature – who has super powers of healing he wants to investigate – is better than letting it die. There is this scene where she explains to Giles why he has to help her, with him basically going ‘it’s a creature not a person,’ and her expressing in very articulate sign language and emotion that he is so very wrong in underestimating how important this creature is to her. Here’s the quote: “When he looks at me, the way he looks at me… He does not know, what I lack… Or – how – I am incomplete. He sees me, for what I – am, as I am. He’s happy – to see me. Every time. Every day. Now, I can either save him… or let him die.” It’s just … seriously. Sally Hawkins. She says so much without a single word, and when she does speak in a dream sequence, it’s so beautiful and sad. Anyway, we all know that it’s the movie about the woman who has sex with a fishman, and she does. They fall in love and have sex and he’s slowly wasting away in an environment not his own. So she has to find a way to save him, even if it means letting him go forever.

This movie is beautiful, in story and in visual design. Guillermo del Toro is an incredible visionary. The plot is simple and yet complicated at the same time, but it’s rather lovely. And it was basically the only happy movie nominated, because yes, spoilers, it has a happy ending. Or it’s implied to be a happy ending (that del Toro confirmed). She is healed by her love and they swim off together to live happily ever after. This is a strange film too, I really never would’ve pegged it as a sleeper hit or a best picture nom, but I can see why it is too. For one, maybe everyone wanted a whimsical weird fantastical romance period piece? Maybe there was something about it that touched the heart, with its excellent acting and underdog characters. Oh all credit needs to go to Doug Jones for his fantastic motion capture performance. When are they going to allow motion capture as a best acting option???? He and Andy Serkis are not given their dues. I definitely liked that this ragtag crew of lonely misfits managed to save the day. And we can’t ignore that it’s three repressed classes (race, sexual orientation, disability) that managed to save another (…honestly he could represent so many things, just general misunderstood victim?).

I came away from the movie smiling and impressed with how it pulled off what in description seems ridiculous. A mute woman in the Cold War falls in love with fishman. Are we supposed to root for them? YES YOU ARE. And if you aren’t sold on their love by the end of the movie, I don’t know. To each their own. But I for one am on board this OTP.