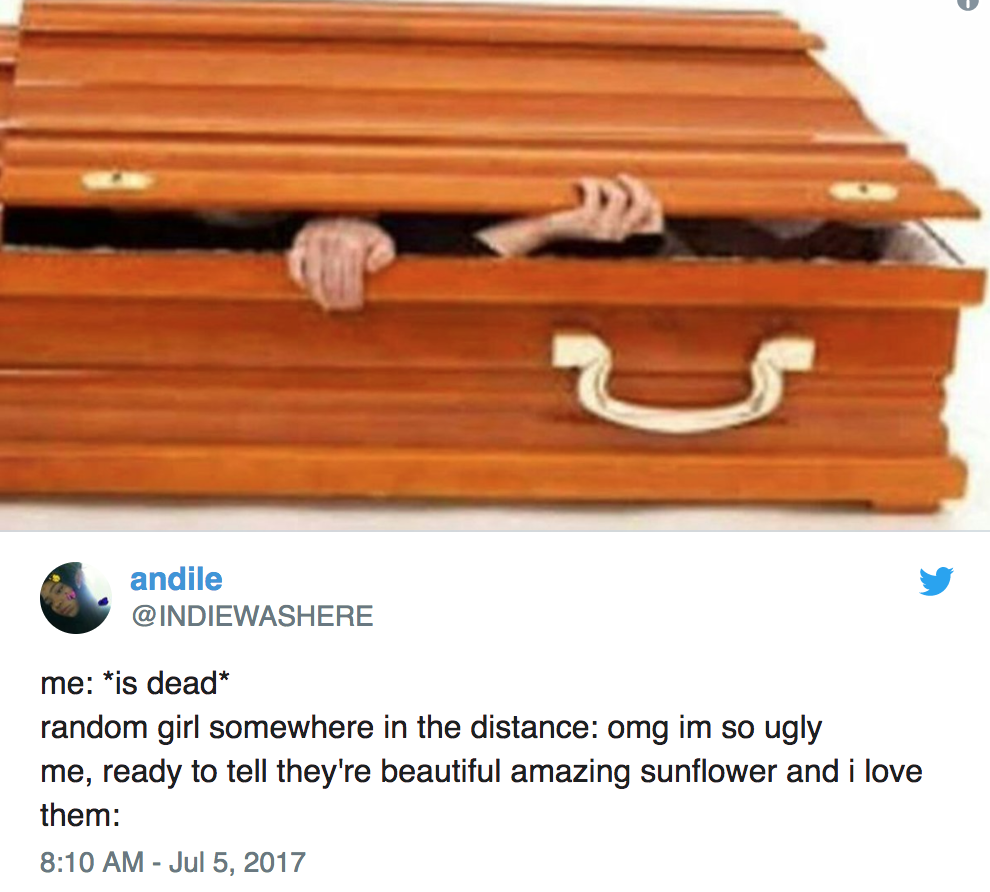 Growing up, there was one thing I learned to be proud of: I was one of the guys. I wasn’t like other women! I liked video games and comic books, I was practically a dude. I didn’t like silly frivolous and shallow things like make up and dresses and girly stuff like other women. Gross. I was cool and special. I wasn’t perfect, because I still sometimes put nice guys in the friendzone, but I could be forgiven for that because I could pwn people in Halo and talk about Star Trek almost as well as a guy! Wow! I prided myself on having more guy friends than girls, because I just didn’t get girls, what with their obsession with gossip and boys and shopping. Being emotional was pathetic, ugh, way to be manipulative. At least I didn’t date assholes instead of nice guys like all those other women who never appreciated them. Probably because they were geeky and sensitive, but you know, not TOO sensitive, because that’s girly and weak.

I’d like to say this is joking, but it’s not, that is precisely how I felt growing up. For most of my formative years I was in a toxic sort of pigeon hole. I’m not going to say that anyone in particular made me feel this way; it was something seeped into my brain through the media and osmosis of gender role expectations and the toxicity of geekdom. I still see it everywhere; we’re not as far past those stereotypes as I would have liked. But I can’t change the world with a snap of my fingers. I can change myself, though, and the perception of who I wanted to be. Up there is just an example, but believe me, there’s a long list of other problematic beliefs that had to be systematically removed from my brain. There are a lot of things I said I wish I could unsay now. If Gamergate happened while I was in my teens, I probably would have been those super cool girls who totally thought it was all about ethics in video gaming.

I always did consider myself a feminist, but I wasn’t entirely certain what that meant. It seemed pretty easy, to believe in the equality of the sexes, and I was struggling to figure out why anyone would say differently. I knew that I existed in a world with a lot of micro aggressions, with a lot of unfair standards and control shadowed over me and my body, and it was bizarre when I realized how much of my behavior was dictated by being afraid or careful about how I walked in the world. I was discussing recently with my friends how I don’t remember if anyone told me the sorts of things I did naturally, like holding keys like a weapon when walking at night, and never letting anyone near my drink, and knowing to pretend I had a boyfriend so men would leave me alone.

But this blog is not about men, it’s about women, and how unfair I was to them growing up.

When I finally became friends with women, it was amazing how quickly my perception shifted, and how mad I became at my quick judgments and assumptions. I love my male friends without question, but I doubt I’d be able to survive without my female friends. I’m not saying female friendship is perfect; we all occasionally feed into the stereotypes stomped into our brains from childhood. We’ve gossiped and stabbed each other in the back and stole boyfriends. Although I don’t think any of that is specific to women, I know men who do the same. But one thing I’ve found is true of the women in my life is that when the chips are down, when something really hard is going on, no matter what they will come through. I could be in the middle of a spat with a friend, and I know if I needed her, or something tragic happened in my life, she would turn around and be that shoulder I needed. Women in my experience have an enormous capacity for empathy. Maybe that is part of the gender roles assigned to us, that women can be in touch with their feelings and reach out to others with it, and I fully support men opening up to that same strength. But I’ve been blown away at times by the immediate kindness and support I’ve gotten from women, and even more surprisingly with complete strangers.

Buzzfeed occasionally posts articles about instances when women who are complete strangers will abruptly befriend each other in a time of need. Or simply because it makes their day. I frequently compliment women on their hair or clothing or something that I think would make them smile. And you can just see them light up. I am a shy person with strangers, but I sometimes have no problem at all making idle chit chat in a bathroom, in an elevator, or on a plane with another woman. Internal misogyny taught me not to trust women, but my instincts and my experiences now reject that concept.

Getting back to the title of this blog, the thing is I never wore dresses until recently. I used to hate the very idea of them, because I associated them with femininity. I wasn’t always able to put that into words, but I can pinpoint that as exactly the reason why now. I hated pink. I hated make up. I hated sappy romance movies. I hated chicklit books. And sometimes you can hate all those things without it being internalized misogyny (I still don’t care for pink or chicklit), but for me, that is exactly where it came from. I understood those were the girly things, and I didn’t want to be seen as too girly. A shift at work meant I had to start dressing more formally, and I said … why not try out a few dresses? The more I wore them, the more comfortable I felt, and I started to order more of them. Now my wardrobe almost exclusively is made of skirts and dresses, and while I wouldn’t say it’s because I intentionally want to be as feminine as possible, the point is that I’m not going to let my former bias stop me from being happy. I can wear jeans and be happy too, but it will always be my choice, without outside pressure. I am a woman and I am happy in my skin. It might not seem like much, but it is for my personal journey.