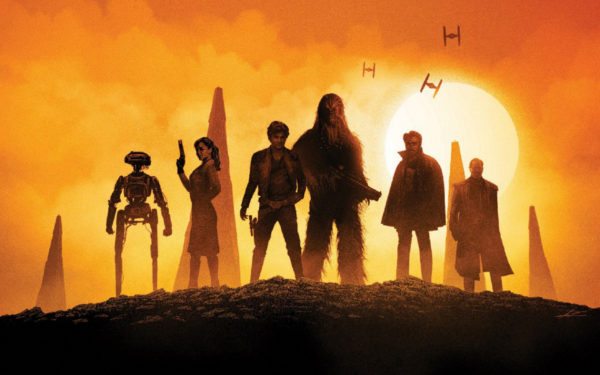 Ahhhh, the movie no one asked for. I should say up front that I thought the movie was entertaining and I enjoyed it, so don’t assume my criticism of its existence is a reflection on how it actually was. But the fact remains that there wasn’t a lot of hype about this movie even before it started to seem like a trash fire of potential trouble as production was a disaster at times. Considering all the trouble behind the scenes, it coming out pretty fun and solid is a big plus in its favor! People went into it just hoping it would be decent, and it was, but that also means that no one was really excited for it. No one said WE NEED A YOUNG HAN SOLO MOVIE. It’s not doing great at the box office right now, but I don’t think that means anything, it could make back its money with time and DVD sales. So I’ll get back into this later, but to start with, here’s thoughts on the actual movie.

Solo takes place somewhere between Revenge of the Sith and A New Hope. I’m personally thinking maybe smack dab in the middle? Ten years before or ten years after. Han (Alden Ehrenreich) is an orphan from the streets of Corellia who is hoping to flee off of it with his childhood sweetheart Qi’ra (Emilia Clarke). While he does manage to get off, Qi’ra gets held back, and he promises to come back for her. Years later he’s been in the empire’s army but obviously does not really like doing it, he’s just hoping to survive and find a way back to Qi’ra. While in a battle, he runs across thief Tobias Beckett (Woody Harrelson) and his team Val (Thandie Newton) and Rio (Jon Favreau). At first they reject him, but Han falls into a mud pit and meets the locked up Chewbacca (Joonas Suoamo). He knows enough of the language to communicate and they break out together. Beckett decides to let them on board for a mission. Their mission goes sideways fast and Beckett’s team dies. They come across Marauder Enfys Nest (Erin Kellyman) who wants the same bounty as they do. Terrified, Beckett has to go back to ruthless crime lord Dryden (Paul Bettany) and admit he failed. There Han runs into Qi’ra again, this time she’s Dryden’s right hand woman and part of the Crimson Dawn Syndicate. Han decides to do the lethal Kessel run to give Dryden the money he was expecting and to set them all up. To do that they need a ship, and Qi’ra brings them to Lando Calrissian (Donald Glover). After cheating and beating Han at cards, Lando does agree to do it for a price. We meet L3 (Phoebe Waller-Bridge), his droid, who wants to throw a droid rebellion. She manages to do just that at Kessel and they only barely escape with their lives, although L3 does die in the process. Han does his famous act of getting through the Kessel Run in 12 parsecs. Or so he says, as Chewbacca argues with the number, but we don’t know if it was a huge difference or not. Lando’s injured and pissed off, so after dropping them off at the drop point, he just takes his ship and bails. I don’t blame him. He also has a cape room and he’s easily the best part of this entire movie. He flirts shamelessly with everyone. I love him. Lando for next movie please.

Anyway at the drop point, the Marauders confront the team and reveal they’re actually good guys, sort of, and they are clearly the early parts of the eventual rebellion. They’re hoping to fight back against the empire. Han agrees to help them and screw over Dryden, but Beckett betrays them. Which is fine because Han did actually plan on that. Qi’ra kills Dryden and tells Han to go after Beckett and Chewie, but she immediately decides to take Dryden’s place as the leader of the Crimson Dawn. Who does she talk to? DARTH MAUL. Fans of the cartoon know that he’s alive, so it made me crack up to see him here. It must be a really WTF moment for fans of just the movies. I love that Qi’ra did this. They were indicating over the movie that whatever happened to her in the past, she’s just crossed the line and doesn’t think she can come back. Or, honestly, doesn’t even want to come back from it. It’s hard to say, but it makes sense she’d rather take power and actually have say over her choices rather than be on the run. I really liked her character and found her fascinating. Han manages to get the Falcon from Lando after they catch up with him, using his own cheating trick against him. And the legend of Han and Chewie begins.

Obviously Donald Glover is the stand out. I think they hired a lot of people with some genuine talent to fill out these roles. I would say that Alden for me was the weakest link, but I do want to be fair to him, it is not easy to be asked to play someone else’s iconic role. They all got to fill in new characters or add a little to old ones, he was constrained by expectations. So I do think he did the best he could. I found him wooden and dull, personally, but I am sympathetic to his situation. I thought the movie was fun! It didn’t feel as long as it was, it went by smoothly, and I do love heist films. It was a nice little interlude off to the side, even if it was completely unnecessary. It would have been fine if this movie never existed; it didn’t add anything really to the universe. It was a good popcorn flick and that’s what I wanted from it, but I won’t really think about it much from now on. It did suffer from low expectations, a divided fanbase after The Last Jedi, and general disinterest in the material. Or no interest in seeing anyone but Harrison Ford play Han. I also think the launch date was an insane decision. What genius thought putting this out at the same time as Infinity War and Deadpool 2 was wise? This should have been a Labor Day weekend hit. Instead it’s going to suffer for a whole lot of background issues that really isn’t fair to the flick itself. I do think people will enjoy it! It’s a great one for the kids, leaning more on the light side than Rogue One or The Last Jedi did. It’s not memorable or particularly special, but it didn’t need to be.

I’m getting Star Wars exhaustion though, I have to say. There’s two more trilogies coming and they’ve said an Obi-Wan movie, Lando one possibly, and even a Boba Fett? Like … jeez. I get milking popular things, and maybe comic book movies have managed, but that’s due to a strict game plan by Kevin Feige and each piece mattering. But as long as it makes money, they’ll probably keep going. So if you don’t like it? Show it by your wallet. I’ll be honest though, I might be a little weary, but I’ll keep seeing them. It’s Star Wars. Whatever.