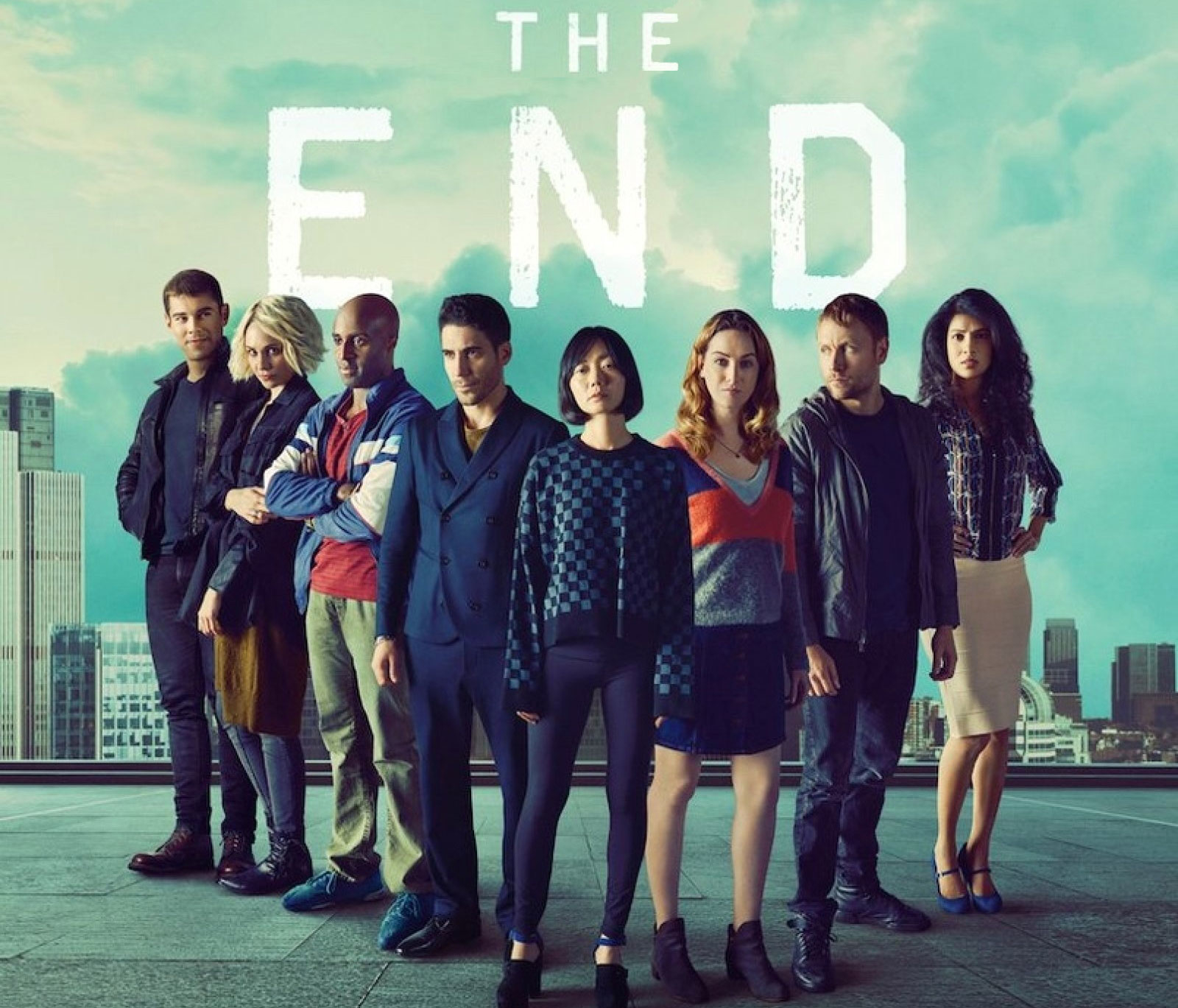 There are spoilers in this review. I also don’t bother to explain it. WATCH THE SHOW FOR YOURSELF THANKS.

As everyone in my life knows, I am obsessed with the Netflix show Sense8. I am so well known for this with my friends that when they decided to cancel the show, I got messaged a bunch of times, with condolences, and then I had so many texts when Netflix gave it a finale that I had to pull over my car to read them. I still think this show deserves more time. I understand it’s very expensive, but Netflix has something special here. Now that the Sensates are all in one place, they don’t have to shoot in so many locations! Surely they can cut costs! Ah well. At the very least we are given this one finale to wrap things up. It is on Friday, and I am already feeling things, so I decided to focus those feelings into this. My top 10 moments from the show, although let me tell you, I could talk about a hundred!

The season one finale sees the Sensates working 100% together in order to rescue Riley. Each one of them uses their skills to help, whether it’s to steal a car, lie and get information, kick ass, or play chicken with a helicopter. We saw the Cluster all help each other, and even a few scenes where several helped at once, but this was the first time each one contributed. And then Will, the white knight, becomes the victim of Whispers. The group will spend a lot of time trying to save him in season two. This however is the last shot of season 1, and it’s the first shot we’ve seen of every single Sensate on screen together. It was a powerful moment that made me freak out, because I needed to see season two immediately. They don’t mess around on their last scenes!

I’ll admit, seeing the Cluster all work together is pretty much always my favorite thing about this show, so you’re going to be seeing it pretty much every time here. This was a big moment, when Lito and Capheus are being questioned and challenged by people in interviews, and the Cluster responds as one. It’s a great scene because it also reminds us of who these characters are. It shows where they came from, reminds us who they are, and how they have become one entity. They are not an I, they are a We! I think it’s actually a great scene in introing the show, almost. These are our characters, for better or for worse, and they’re finally having confidence in themselves and their connection to each other.

It is so hard to pick a Sun action fight, because she is beyond incredible. Sun is like my closet favorite character, in the sense that I love everyone but I am drawn constantly to her storyline and her inner workings. Still, her relationship with Capheus is one of the first to develop. Capheus, sweet summer child that he is, cannot fight back against forces so much stronger than he is in his unjust environment. So he taps into Sun, who very much needs a vent for her suppressed rage and extreme fighting skills. This is when we really saw her unleash and take down an entire crime group by herself, without a scratch on her. I also clapped like mad when she said “Call me a bitch one more time.” She is beauty and she’s grace, she’ll kick you in the face.

Oh look, another bitch said before an amazing fight! As I said, I love love love when the Cluster works together, so of course seeing not one but TWO Clusters go at it? Nirvana. There are a lot of great things about this scene. Before this, Wolfgang refuses to ask his people for help, because he’s never good at asking for help or getting others involved in his trouble. We’ve been seeing this dark phoenix Cluster, who works with Whispers, and Wolfgang’s continued refusal to play with her leads to a showdown. The group works together to kick ass … against an equally skilled and dangerous group! Plus just them all standing behind each other makes me flail every time.

Capheus is pure sunshine. He is the sweetest and kindest of the group, and I feel like we all forget how much hardship he’s gone through because of his positivity. But he reminds us with heartfelt moments like this. It’ll come up again. Anyway, it was so lovely to see Capheus get his dues in his world, and it’s all because he’s a good man. Sun may have killed those gangster for him, but it’s Capheus’ optimism and spirit that make people start to believe in him. It is really heartwarming to see him here, speaking from his heart and about his own struggles; even his own blood and birth is tragic, but he’s still him. Of course this becomes a disaster soon after, but it doesn’t change how wonderful it was to see him take center stage. Capheus is the kind of leader we all need! And if he needs some steel in his spine, he has a few Sensates he can ask for help.

#5. The Group Fights Back

I couldn’t believe this wasn’t higher, but it has so many great scenes, so sue me. Still, I screamed out loud when Will punched him in the face. He’s there!!!!!! Listen, I’m not going to question how that was even possible, because I don’t care. This was an amazing reveal and seeing him punch Whispers over and over was amazingly cathartic. After Wolfgang was taken from them, and they all were potentially getting tortured with him, we were all worried about our Sensates. But they are not the kind to stand back and let things happen. They’re active participants in their future. They grab Whispers, they grab Jonas, and they’re PHYSICALLY IN THE SAME PLACE Y’ALL. I have been waiting for this so long I can’t even express my joy. I cannot wait to see how this gets resolved, and to see what it’s like for all of them to be in the same place. And for their loved ones to meet each other! Ahhhh!

In a lot of ways, this might be my favorite emotional scene in the show. I don’t think it’s as important as one higher in the list, but it’s one that stays with me. The line I quoted above is one I personally have kept with me. It’s not something I think we all can actually accomplish, but the sentiment is really important. There is another quote this reminds me of, “Holding onto anger is like drinking poison and expecting the other person to die.” We should all be more like Capheus’ mother, who also went through terrible things and stayed strong for her son. Beyond that, this is another beautiful moment where each of the Cluster speaks to Sun gently from their point of view. She says it makes her more confused than before, as she’s thinking out loud about what to do with her murderous brother, but the point is she’s not alone. She is a We. And they will always be there for her. Especally when she runs after her brother in a bra and hot pants.

I will admit that the first few episodes of Sense8 aren’t perfect. I was hooked right away, but I know people who struggled, since there are a lot of characters to keep track of and no real sign yet how deeply they’re connected. Personally, this moment is when I got hooked on the show. It was the first scene where we saw them all connect, and it was in such a light hearted and sweet scene. The thing is, Sense8 is about emotion and love and human connection above all things. It has action and drama, but at its heart, it is this. Plus now every time I hear this song I start smiling and sing at the top of my lungs like them. It’s the theme song of the show now, as it well should be. I tell everyone, if you can just make it to this scene, you’ll get the hang of it. And on the whole I’ve been right with people I recommended it to!

There’s a longer scene here but I couldn’t find the full video. If you look it’s easy to find pieces of this convo on YouTube, just not all the way through. This is the key of the story though. This show is influential in a lot of ways. It is racially diverse and sexual identity diverse. And they gave this incredible transwoman actress the ability to speak to her own experience and to bring to life Nomi Marks, who is in many ways the true leader of the Cluster. I challenge anyone to watch the scene where Lito talks about his love for Hernando and his heartbreak, and the struggles he has coming out when it would mean the end of his career, and to hear Nomi’s story about torture she was given from angry young bigots, and not feel something turn in your heart for gay and transpeople. You’d have to be inhuman in my opinion not to have empathy for these two people and their pain, and to this day it can make me cry. I think Nomi’s statement here, that the worst violence is what we do to ourselves by not being who we are, is also very powerful.

When I ask myself what scene I’ve seen the most, what scene makes me think THIS IS SENSE8, it’s their birthday celebration. All the Sensates were born in the same minute, which is how they became a connected Cluster. This is from the Christmas special, where each of them celebrates in different locations, but because of their hive mind they can all have fun and connect to one another. Sun is in prison but through their souls, she can experience several different parties, surrounded by the people who love her. There’s a lot of pain and angst at times in Sense8, and what this scene is about is pure joy. It’s about the beautiful nature of these eight people and what they mean to each other, and how they can still find happiness in each other even when terrible things are happening around them. Yes Will is being hunted, and Sun is imprisoned, and Nomi is in hiding. Wolfgang and Kala are detached because she’s married. Lito has been outed. But for this one night, they get to be who they are and embrace their life. It’s just glorious and it makes me so happy from beginning to end. HOW AM I GOING TO SAY GOODBYE TO THIS SHOW.