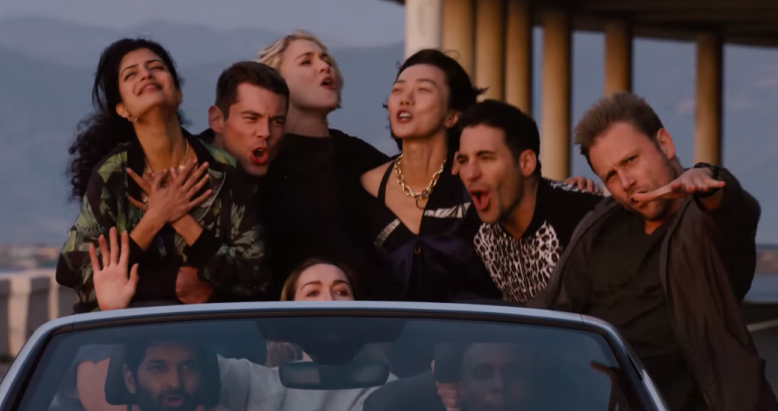 There are major spoilers in this!

There’s a photo with mild nudity because you know what Sense8 does.

It is really hard to write this because I have a lot of feelings and it’s both wonderful and painful to see something you love end. The plan was for Sense8 to have five seasons, but it got canceled after two, so they had to cram as much as they possibly could in two and a half hours to wrap things up. I think they did an exceptional job, and I can forgive a lot of things that felt rushed because we all know they didn’t have the ability to do it. A lot of incredible things happened that I will talk about in exact detail in another article I’m writing about my top 10 moments from the finale. This is the actual recap and review of it though. Sense8 will never really leave me. Not exactly a previously on but things necessary to know for the finale: Wolfgang was captured and tortured, so the group had to come together to figure out a solution. That solution included kidnapping Whispers and Jonas. They are in touch with a lot of other Clusters now, and one of them at least is evil, Lila’s group. So the general gist was to save Wolfgang and stop BPO. 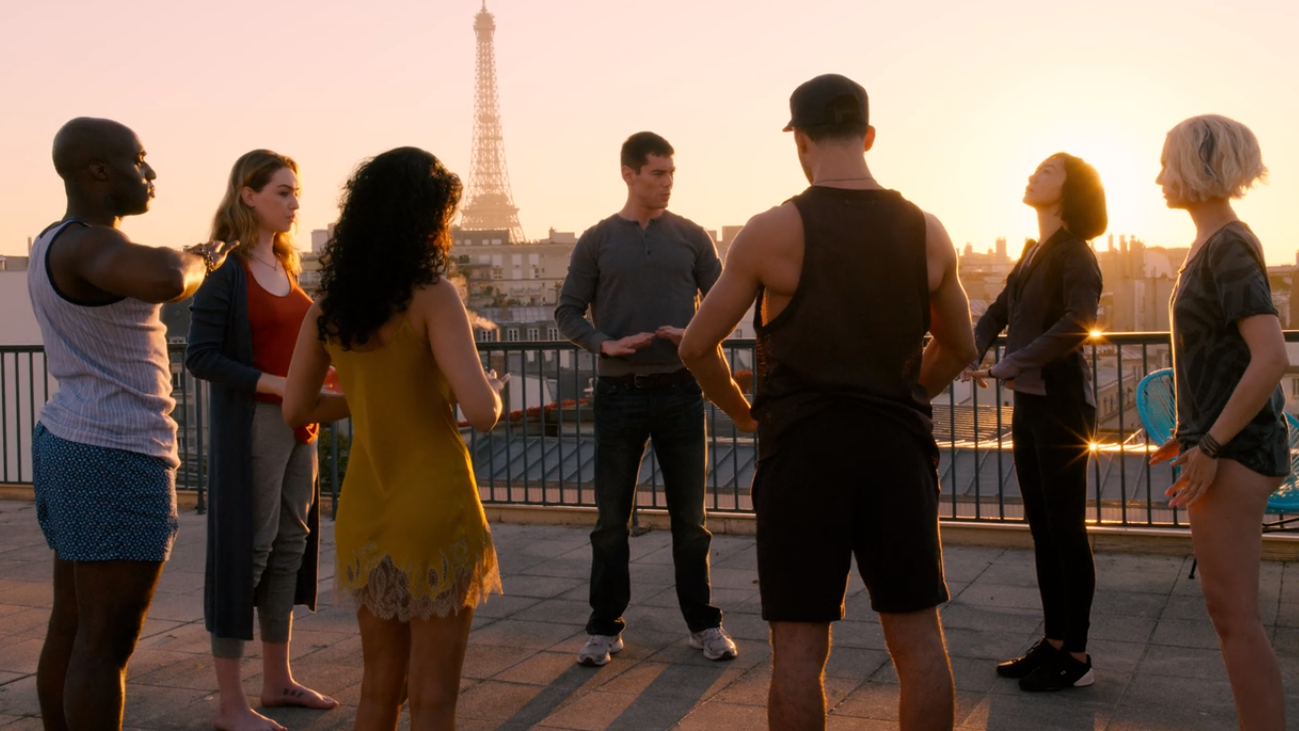 When I finished season 2, all I wanted was to see what it would be like for the gang to be in one spot. They’re all physically together, and as the episode goes, all their loved ones get brought in as well. Watching them simultaneously try to understand how the Cluster works while the Cluster is doing their own thing and getting things done was fantastic. Dani and Hernando are blown away by it and fascinated, while Rajan is speechless but does embrace it. Felix and Diego don’t seem to question it at all when they show up, neither does Detective Mun. I’m getting ahead of myself. The Cluster are in serious mode trying to track down Wolfgang. They plan on trading him for Whispers, who they all need back because he’s the only one in charge of the Zombie project, where Sensates have been lobotomized and can be controlled by him. So they need him. The Cluster is also trying to figure out how to take down BPO so they can go back to their own lives. Lito’s starring role is in jeopardy and Capheus is supposed to be running for office, and Nomi and Amanita want to get married, so there’s a lot they are putting on hold to solve this crisis. Wolfgang tries to escape and almost commits suicide, but Kala stops him. He holds on long enough for them to do the trade at a busy club. They all manage to take part in it, even the humans, and escape. Mun shows up after having a convo with Sun on the phone and tracking her there. Wolfgang is saved! But Whispers is kidnapped again by Lila’s Cluster who want to use him as leverage. Womp womp.

Now the plan is to go get Whispers because they need to kill him to stop the zombie project. BPO is descending upon all the other Clusters in the world. They do ask the Cluster to kill Whispers instead of saving Wolfgang, which they refuse, but they know they have to take him down now. A few other sensates help them out when they get to Naples, where Lila and her crew are. They first have a group sing along with all their loved ones involved too, because you know how Sense8 rolls. Jonas’ final plan is revealed; Angelica’s curiosity to learn more about Sensates unfortunately led to the invention of the zombis and the dark direction BPO led to. Like scientists before her, whose creations led to calamity instead of help. A long while back her Cluster tried to destroy the Chairman and everyone involved, but they only burned him badly, and that’s what led to Angelica on the run and leading to their birth. Jonas is using a bomb to destroy all the zombies and the project, and if Whispers dies that part will be over. It was good to see his story pan out. BPO does have people inside of it who didn’t like the direction, and they promise if the Chairman and dark sides are taken care of, they’ll fix it. So now the Cluster and their friends have to figure out how to get into a heavily guarded area Lila’s stashed Whispers. They find him out because his original Cluster mother reaches out; she’s been detached and full of wisdom at a random place far away. She says he wanted the zombie project specifically so he’ll never die and just keep jumping bodies. 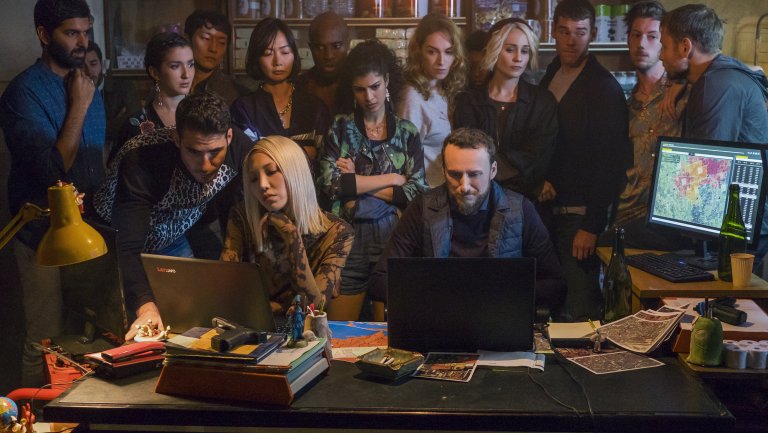 Hernando is the one who comes up with the great plan to create a Trojan Horse. I love his mind. It’s brilliant. He has them all pose as tourists to sneak into the space, because the mercenaries there are too careful to just unload on a bunch of tourists. The group easily sneaks in and it is an UTTERLY HILARIOUS scene as they all pretend to be silly tourists taking photos and getting in the way. This leads to a create action sequence as they lay siege to the area, each splitting up and kicking ass. Kala gets shot, but like a badass she saves her own life with the help of her boys (Rajan and Wolfgang, and this headed in a GREAT DIRECTION). Lila gets away with Whispers and Will chases after them. While Jonas kills himself, first he uses the same thing Whispers used to control the zombies and kills the Chairman before a deal can be made. Then Wolfgang uses the rocket launcher (YAY) Felix brought to kill Lila and Whispers and end it all. Nomi and Amanita get married in the Eiffel Tower (yes for real) because the new BPO leaders have pull, and the entire cast and all their family and loved ones are in attendance. The last scene is naturally all the main characters having group sex, while we also see the starts of their relationships. Nomi and Amanita, Lito and Hernando (and Dani, which … was a little odd was she actually having sex with them or just there), Capheus and Zakia, Sun and Mun, Riley and Will, and Wolfgang and Kala … AND RAJAN. I was so excited to see that OT3 come to pass. Obviously it would’ve been nice if we had more time to see it grow, but I was all into that for a solution to a love triangle. It ends with love love love and also a rainbow dildo lol. And everyone lived happily ever after! 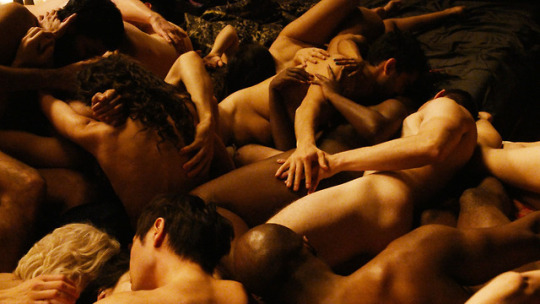 I will admit I don’t always love sappy endings. I occasionally dig them, but most of the time I prefer bittersweet or dark. Still, I am a huge fan of Earn Your Happy Ending as a trope, meaning if you struggle and fight for happiness, it’s well deserved in the end. I don’t want happy handed on a plate, but these people went through a helluva lot to get to there. And the idea of a very diverse cast, both racially and sexually, living happily ever after, rather than being fridged or debased, is super important. Sense8 was famous for representing as many minorities as possible and portraying them beautifully and sincerely. Another reason I was pleased by the Rajan/Kala/Wolfgang situation was poly did seem to be one place they weren’t hitting, but that solved that. Sense8 is about connection and emotion and belief and kindness. It presented eight very different people but had them live in each other’s shoes constantly and grow and change as one. I have an impossible time picking a favorite character because I LOVE EVERYONE. For real. I love all of the mains and all of the sides and this show was special. It kills me this is the end.

Okay so instead of gushing, other things that stood out. The visuals were great of course! It was so pretty to see Naples and the Eiffel Tower wedding. The action sequences were perfectly done, and I can only imagine how hard it is at time to be like OKAY YOU DO THIS and now YOU DO THIS AS IF YOU ARE THAT PERSON. The finale was hilarious too, I laughed out loud several times. Everyone felt true to character. I wish I’d seen Whispers burn up to be honest, but that’s the furious part of me. He’s a great villain. I am sad that we won’t get more answers about Mother and the overall powers of Sensates and what connects them. I feel like there’s certainly more to delve into there. I can’t think of anything I didn’t like, outside of the fact you can see clearly they had big plans for the next few seasons and never will get the chance. Yes things were rushed, yes some characters did not get a chance to shine they deserved, and if they had the time they could have. So the thing I don’t like: YOU, NETFLIX. This show was unique and powerful, and you didn’t give it a real shot. You didn’t market it well, you never seemed to know what to do with it. I understand the show was very expensive but if you tried to cut down on that, I’m sure they would have found a way. Ah, well. The actors were great, the story was great, the crew was great, and this will remain one of my favorite shows of all time. And I am thankful we got this ending.