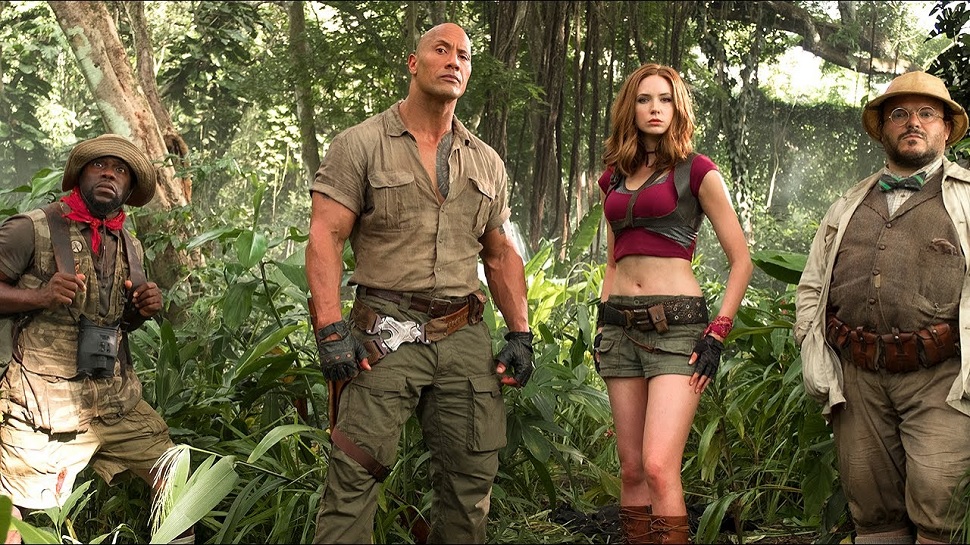 Jumanji is one of those movies that never really gets old for me. I’ve seen it so many times by now that I can quote most of it, although in recent times it’s been harder to watch with Robin Williams gone from the world. Still, like most people I found myself skeptical when I heard there was a reboot happening, because they’re everywhere and it’s frustrating. I warmed up to it when I saw the cast, all people I love (the Rock, Karen Gillan, Jack Black, Kevin Hart), and I was sold once I saw how they were updating it for the modern time. An old school video game version instead of a board game! When I heard reviews that it was perfect for gamers, I was 100% in and convinced my friends to go with me.

I don’t think anyone expected it to be as successful as it was. Jumanji held a steady firm hand on the box office, or a strong role in it, for months. I saw it much later than its release date and was surprised to find the audience full of people. I did know the reviews were positive, and the audience score was positive, but that doesn’t always mean financial success. So what was it about the movie that just seemed to work on all the levels it needed to? Let’s take a look.

Four teenagers from very different worlds come together in a Breakfast Club like setting after getting sentenced to detention. Oh first, years before that in the 90s a young man finds Jumanji the game but is like lol who even plays board games, so it magically makes itself into a video game after apparently perceiving him to prefer that. Jumanji is magic so I guess I can accept it knows how to modify itself to the times, why the hell not. He gets sucked into the game. So back in real world, the teenagers are forced to clean out a basement, and they come upon the video game. They decide playing the game is more fun than cleaning and pick characters, and then they are shocked to find they’ve been transported into the game.

The characters are your typical teen clichés, and the movie goes exactly in the direction you’d expect, and that’s fine. We’re not looking for wild twists here. The nerd Spencer ends up in the body of the heroic Rock, the jock Fridge in the tiny Kevin Hart who is the sidekick, the feminist Martha in a highly sexualized (but awesome) female fighter, and the ditzy blonde Bethany in Jack Black. Yes they enjoy the latter a lot. Yes it’s actually quite funny and I never really felt like it was overdone. It was sort of fun because Jack Black wasn’t really himself at all. So even if you were done with Jack Black, it wouldn’t bug you. They find out quickly that you only have a few lives in the game, and if they lost all their lives they would lose the game. They have to use clues from NPCs and journeys through RPG-ish settings to find this medallion and return it to a giant jaguar mountain to win the game.

As promised, this movie had a lot of video game jokes. I loved all of them. I giggled as they found out their special powers and weaknesses, the NPC driving them repeating himself still cracks me up, I generally had a great time. They eventually meet up with that boy from the 90s, Alex, who has been stuck there surviving, and he’s actually charming and cheerful. And a Jonas brother. Nick, to be exact. I can’t tell any of them apart. He’s been trying to solve the game for awhile, but without help it was a lost cause. He’s out of lives and he’s hesitant to risk it, but decides it’s their only way out. He and the Bethany bond, especially after she selflessly gives him one of her lives. She’s probably the character who grows the most over the movie, although they each have their own journeys. Except for the jock Fridge? He doesn’t seem to change much, outside of being nicer to the nerd and remembering they used to be friends. Kevin Hart certainly had some of the funnier scenes, but I felt like there was more to his character than they decided to go with.

It’s a nice fluffy story. It goes exactly as you’d expect, but it’s funny and charming on the way there. It has some solid action scenes and CGI, and the actors are clearly enjoying themselves. I think it was a movie that was a success because it didn’t take itself seriously. It knew what it was, and sometimes we all want a feel-good silly flick to entertain us. That’s exactly what Jumanji was originally, and this one did the series proud.

I’m not so sure I’d encourage them to do another one, because I think this liquid in a bottle situation was a rare fluke. But I’m glad I saw it and I’ll see it again when it pops up onto a streaming service.