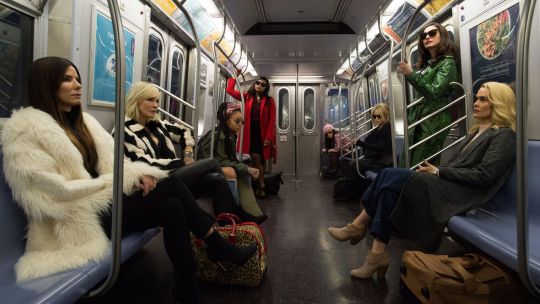 True fact: I love the Ocean movies. I own all the others, and I am looking forward to owning this one, and I don’t really get DVDs anymore. I generally enjoy stylized caper heist movies with clever dialogue and charming stars. Sometimes I just want a fun flick that makes me smile and laugh and nothing more than that. Ocean’s 8 definitely delivers on that. I’ve been excited about this movie since it was announced, and the cast announcements got me more hyped. There’s a lot of reviews saying “It’s good but it’s not as good as the others” and I think comparing them at this point is a mistake. Yes it’s set in the same world, but the style and the feel of it is different. Maybe it’s the part of me that says guess what you can enjoy ALL the things equally, and in this case as a super fan, I really do. Then again, I actually liked Ocean’s 12 and 13. So I might be overly affectionate toward this series.

Debbie Ocean, the sister of Danny Ocean, gets out of prison. This mirrors the first scene with him, but Sandra Bullock’s comedic timing is one of her strongest suits as an actress. Her sincerity sucks up well to the people listening, but you can see the spark in her eyes since she knows every word is a lie. She gets out and immediately proves her con skills by going into stores and stealing right under their noses by pretending to be RETURNING items without a receipt, and leaving with them as if they were always hers. The ease with which she then gets a fancy room is impressive and sets the tone. She reunites with very good friend Lou (Cate Blanchett) and convinces her to do a con at the Met Gala. They are going to steal a very fancy necklace by getting it out of a vault and onto the neck of vain and wide eyed actress Daphne (Anne Hathaway). To do that they recruit fashion designer Rose (Helena Bonham Carter), jeweler Amita (Mindy Kaling), profiteer Tammy (Sarah Paulson), thief Constance (Awkwafina), and hacker Nine Ball (Rihanna). Debbie also is using this opportunity to get revenge on her ex Claude (Richard Armitage) who let her take the fall and go to jail. She sets him up as Daphne’s date and to plant evidence on him of their crimes.

The plan is artistic and simple. Tammy creates a fake version of the necklace, they make Daphne very very sick, Constance steals it off her while she’s vomiting, Tammy pretends to find it in the water, and no one notices until it gets back to the jeweler. It turns out, as Ocean movies tend to go, that this was only one part of a bigger con. At the same time they were stealing dozens of jewelry at the Gala that no one was paying attention to while focused on Daphne. There’s really only one major complaint I’d have about this move, and that is how obvious it is that Anne Hathaway’s Daphne would join the team. Since there are only seven of them and she is the only one possible to be the eighth, that’s a little unfortunate. Also all the photo promos showed the eight of them together, so you know she has to be in on the con. At least they don’t have it that she was always part of the con. She started to put two and two together and wouldn’t give the police the answers they wanted without being involved, so Lou and Debbie  told her early. It is pretty funny when she reveals the reason she helped them is she has no friends and is bored. She doesn’t need the money, she just wants to be a part of something cool. That almost made up for the fact it was so obvious. Hathaway as always is great, and I like seeing her get back other comedy routes, she’s quite good at making me laugh.

If I had to pick another flaw, I would say that I wanted us to hate Richard Armitage’s character Claude a little more. Yes we know he let Debbie take the fall for his crimes, although I personally would’ve liked it better if she for once was innocent of them and that’s why she was particularly furious. They did a good job in the original Ocean’s of making the lead guy a realllll jerk.  Richard’s character was more dull than despicable, so they could’ve done a little better with that. James Corden felt a little random, but I ended up finding him funny and worth a little screen time. Overall though I enjoyed the film a lot. The actresses were all magnetic in their own parts, and when we did get to see them work together it was fun. If they do another movie, I hope we get to see them bond a little more. The costuming was of course splendid, and the style of the flick really worked. I did laugh at the implication that Danny faked his death, with Debbie suspicious he wasn’t actually in his grave. That’s so classic. I also smiled at the reference to WHY all women made sense, because going to the Gala meant they would be ignored and fit in, whereas a man would stand out there. They didn’t need to give an excuse for the cast, but I think it made sense to present it this way, and make a little dig about how women are underestimated. Also the quote “There is an 8 year old girl out there dreaming of being a criminal. This is for her” made me laugh, but also made me think about how these powerful badass ladies are also kind of awesome and representational.

Ocean’s 8 was a blast. While the story itself was very direct, all the parts that added up to the film made it a strong outing. There were a few little cameos that didn’t take away from the rest of the story, which I appreciated. The movie was successful in the box office, enough hopefully to get it a sequel. I definitely think the foundation of these women and their excellent work together means they can come up with another story. MAKE IT SO!