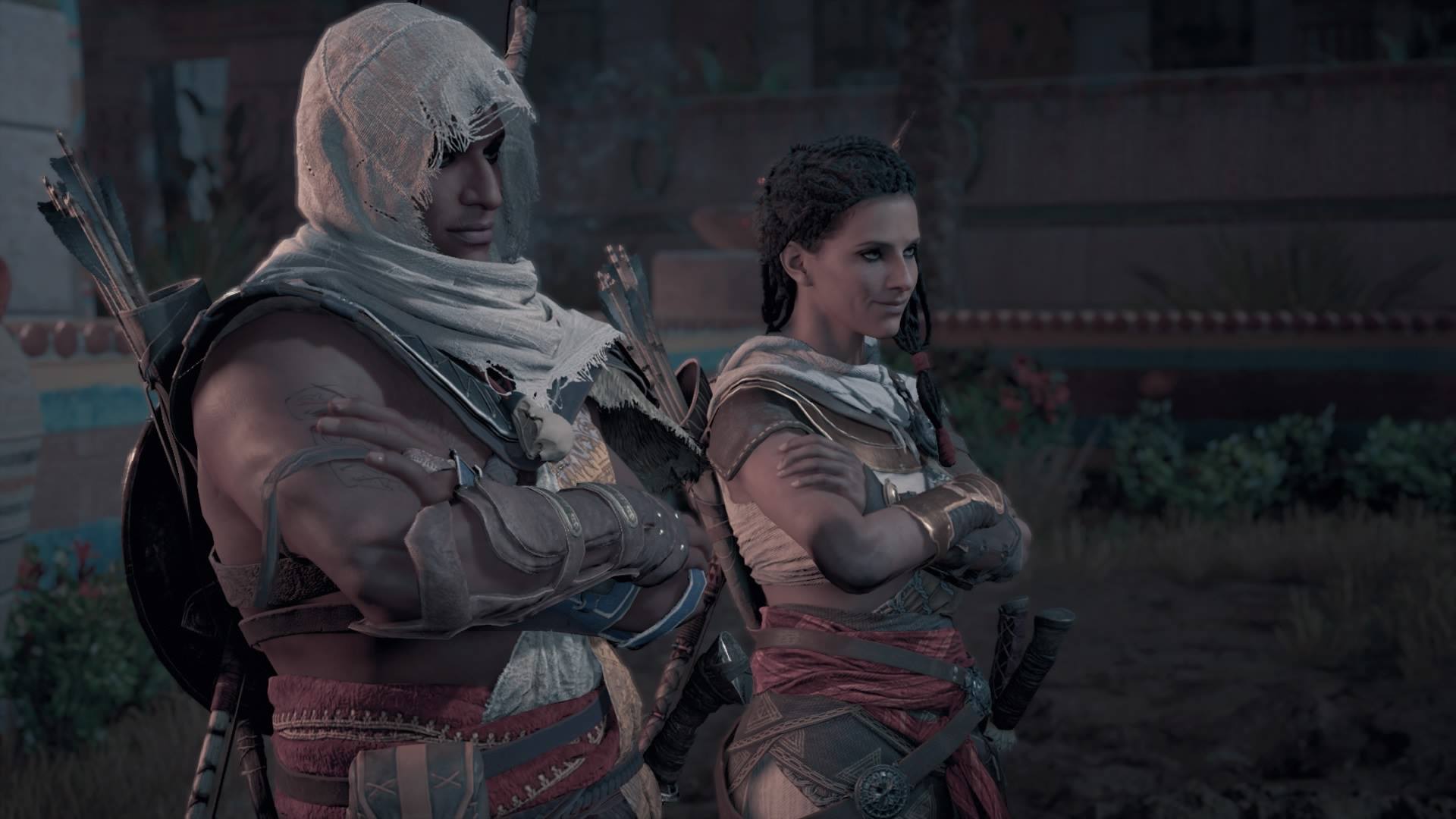 There are spoilers for the game in here.

The images are from my own playthrough!

I love the Assassin’s Creed series. I’m one of those few gamers I know who had no issues with the less popular games. I liked Assassin’s Creed 3 (don’t kill me) and Unity. Were they the best games of the series? Ha ha ha no. Not in the least. But it would be very difficult to give me an Assassin’s Creed game and hear me say afterward “I hated it.” And you’re not going to hear it now with Origins, although I will say I have more caveats than usual. I wanted to set the stage of my obvious fandom bias for one of my favorite series so you know I won’t be very objective here.

Origins came as the answer to a question I’d been asking since Syndicate: Where do they go from here? We were almost to modern time, and since the modern time setting of the games is usually the least favorite aspect, I wasn’t entire certain what was open to them. I would have loved to see him go to India for adventures of Henry and Evie after Syndicate! Alas. So the fact they’d go back to the origin of these two warring groups seems like the obvious choice. Duh. They’re not even called the Assassins and Templars in this in precise terms. We do know where it’s leading, especially as Aya changes her name to Amunet which is such a fun nod to Ezio’s search for the shrine and Altair’s armor. At the end of this game I had the same question though, where do they go from here? Hmmm. Let’s focus on Origins first. 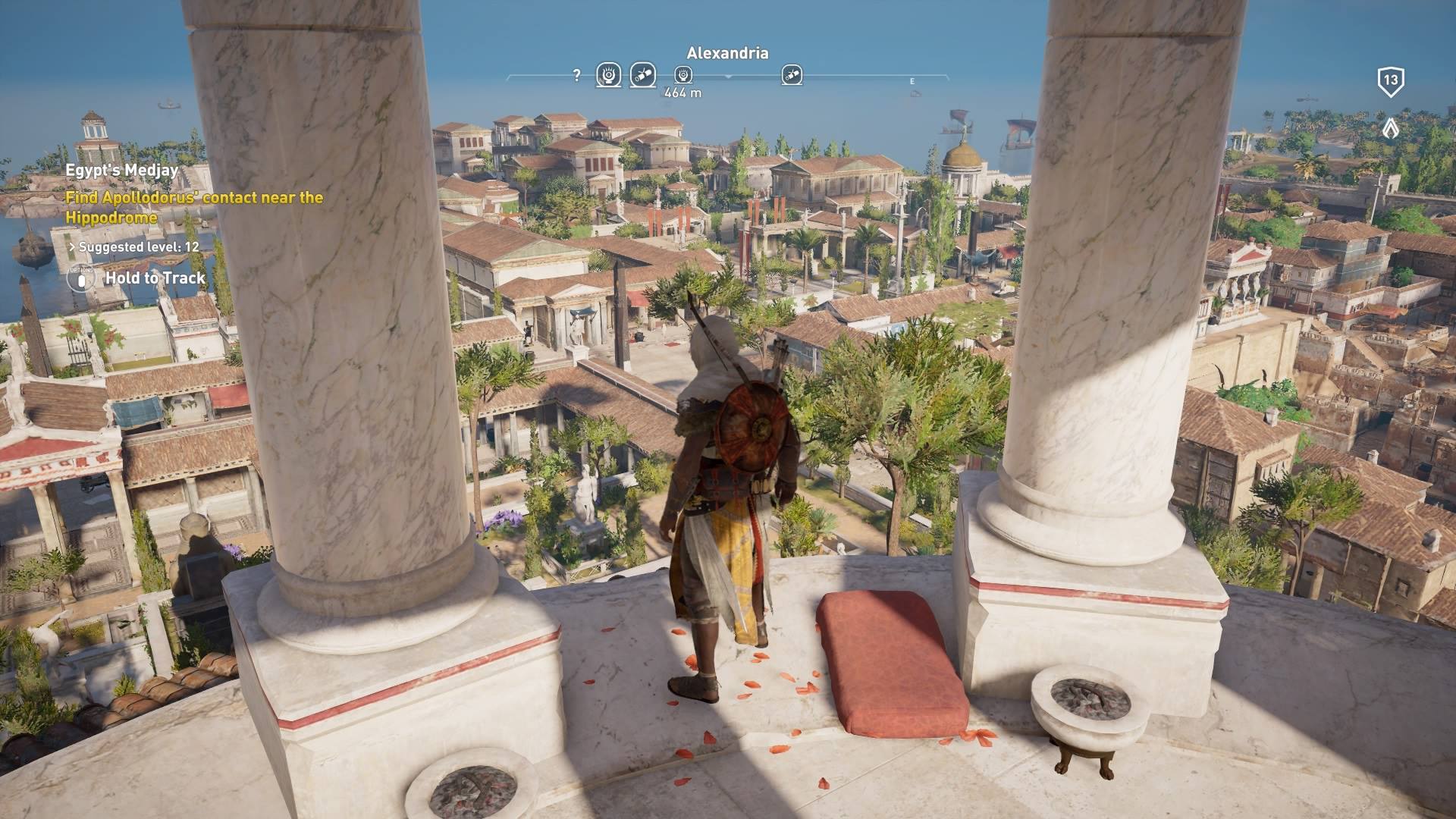 The protagonist of Origins is Bayek of Siwa, and his wife Aya is a co-protagonist of sorts, although with less focus than I would have personally liked. She’s excellent and I would’ve been happy to spend half of this game as her just as a nice balance. Bayek and Aya are on a path of vengeance after their son Khemu is killed. They’d kidnapped Bayek, a medjay, to try and get information about how to open a mysterious vault, but he didn’t know the answer. He accidentally kills his own kid with a knife attack gone wrong, which is just heartwrenching. So they start tracking down the group behind this one by one, learning as they climb over bodies that there are bigger conspiracies at work. Bayek from the beginning is very much focused on his vengeance, no doubt in part because he feels responsible for Khemu’s death. Aya wants that too, but she always sees the big picture as well, assisting Queen Cleopatra in gaining the throne over her vicious dictator brother Ptolemy. I am a big Roman/Egyptian history nerd so I was gleeful about all these additions. Like a lot of the other games, we see major historical figures like Caesar and Cleopatra, and it made me smile just as much in this. If anything, I wanted more!

Aya starts to see that this is more than just about her son but about Egypt, and it’s not enough to kill the early Templars, it’s about making things safer for all the people. So she clearly is set up as the rising leader and founder of the Assassins, and Bayek is as well, but they separate as a married couple since their priorities have changed. Which is sad, as they are a serious OTP and a power couple, but you can see this coming whenever they argue over what the overall goal of their mission should be. Even after Cleopatra betrays them, Aya is even more determined to create a group to fight against dictators and to put the people first. I like both of them a great deal, and I found it tragic but satisfying that their marriage ends because their mission becomes more important than the personal connections.  This game is also very dark and sad; not only because their own son dies, but because they kill a few other children, always surprising me, and there is a sort of overhanging hopelessness to the time you can wallow in. It has to be a hard time for the Assassins to find their drive to fight back.  The story itself is the strongest part of Origins. It is tragic, sometimes funny, beautifully designed, perfectly voice acted, and satisfying in its conclusion. 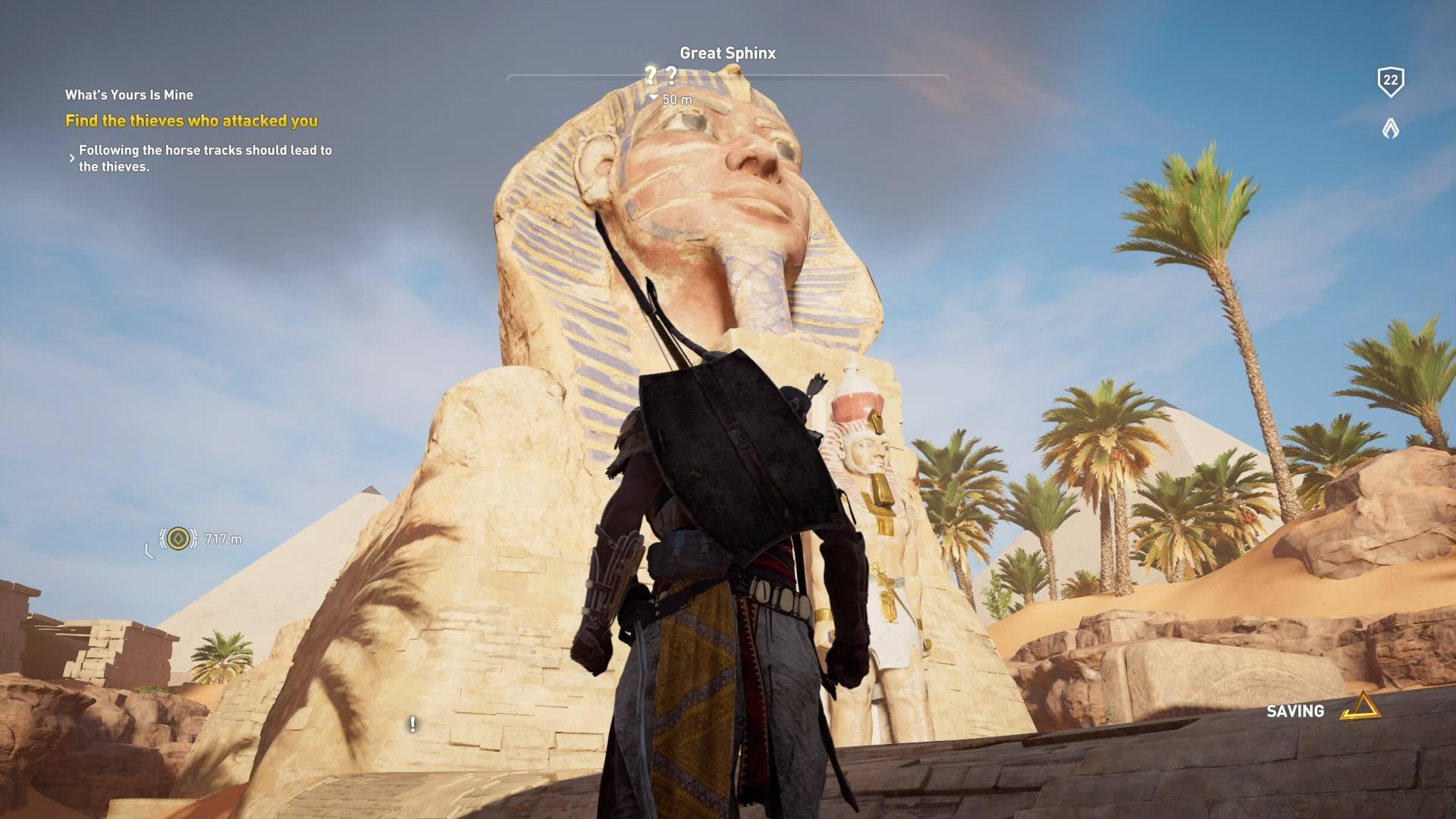 In the modern world we are introduced to new main character Layla Hassan, a researcher who goes rogue with her friend too prove she would be an asset to the company. She finds the crypt for Bayek and Aya and uses a unique way of getting into their memories, but it leads to her being hunted down. And meeting William Miles, Desmond’s father, who wants her to join the modern day Brotherhood. Usually the modern world is my least favorite part of the game, and this is no exception, but it wasn’t overdone and I do like Layla.

So the actual mechanics of the game is where I start getting mixed. The thing is, I love Assassin’s Creed, and I love the way the games are typically set up. I like the fighting style, the more contained sidequests, the different type of leveling up and use of weapons, and I love the Brotherhood/Gang options we’ve seen in the past. They changed it up here and made it a much bigger world with open options. I still did enjoy the sidequests, although it was gigantic, but eventually I got weary of them. It was simply too many for me personally. I’ve never been a big open world fan, I like more of a singular direct storyline. I did enjoy all the crypts and tombs, and while I didn’t finish all of them, I thought that was a nice addition, especially for people who wanted to get all those achievements. The design of Egypt was excellent and I did enjoy wandering around, but I can’t say I really liked the fighting style. I didn’t have much interest in armor or weapons, I’ve appreciated the simplicity of the earlier games so this just smacked to me of feeling like every other open world RPG out there. And I play those games! I do. But it’s not what I’m looking for in an Assassin’s Creed game. I am excited for the remastered Rogue to come out on PS4 soon so I can get back to the basics. 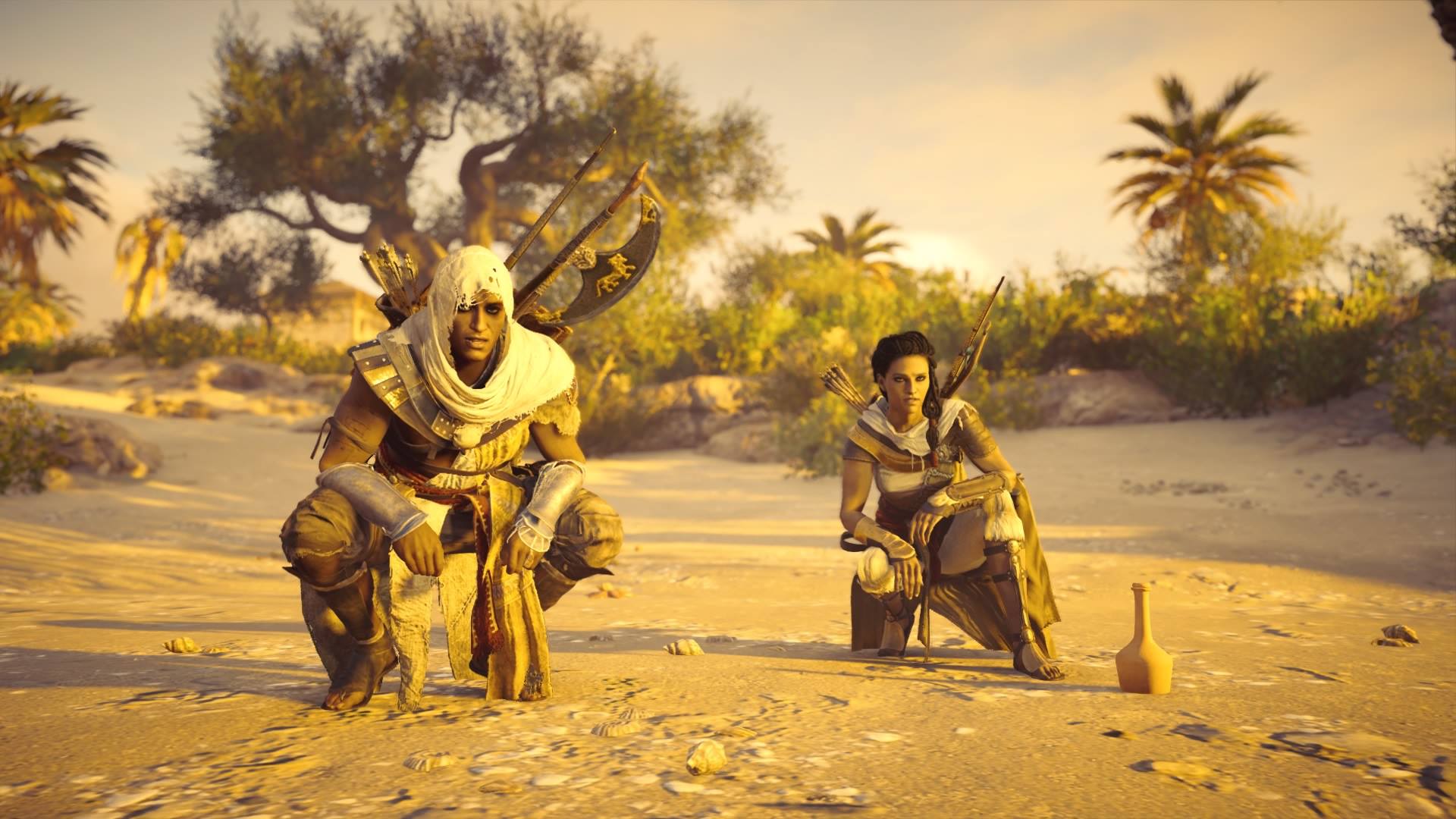 Also, there’s the eagle. I have cursed that damn eagle so much I almost quit the game over it. I know in theory what they were going for, but in execution it was horrible for me. It set off my motion sickness like nothing else, and I was frustrated when I would swoop around a dozen times and still a guard or two would be missed. I want my original eagle sight, okay? I don’t want the actual eagle. I also don’t want to hunt animals as a part of my AC game. I don’t want the style that has become almost cliche in the gaming world. Yes I know not all change is bad, and to appeal to a wider audience they wanted to try some new things. I respect that, but I don’t have to like it.

In the end, the story was excellent. Every aspect of the characters and the plot worked for me. I loved all the main missions and watching these two characters grow apart and change perspectives. Visually the game is stunning. The work that went into the way Egypt was set up, the clothes and the buildings, the pyramids, the details of each ancient city, it was incredibly impressive. But for me personally, the mixed bag came with the mechanics. The eagle, the fighting, the leveling and weapons/armor, the ridiculously huge map and side quests, all of that was not what I wanted out of this game. I appreciate it worked for other people, so this is all subjective, but for my own enjoyment, I’d rather them go back to the particular style that made them unique.  And if that freaking eagle shows up again, I can’t guarantee I’ll play it.